Stefanos Tsitsipas stunned favourite Roger Federer to reach the final on his debut at the ATP Finals on Saturday, beating the six-time champion 6-3 6-4 at the O2 Arena.

The stylish 21-year-old, the first Greek to qualify for the tournament in half a century, soaked up everything Federer threw at him and returned it with interest to subdue the Swiss great.

World number three Federer, 17 years older than his opponent, was unusually profligate when his chances came along, failing to convert his first 10 break points.

Tsitsipas, who showed no sign of fatigue after a near three-hour group stage defeat by Rafael Nadal on Friday, was far more clinical, converting three of his four chances.

He will play either defending champion Alexander Zverev, who he has already beaten this week in the round-robin, or Austrian Dominic Thiem in Sunday's final.

Federer enjoyed loud support from the 17,500 crowd and even at the death he looked as though he might turn it around as Tsitsipas wobbled when serving for the match.

Yet it was not to be as the Greek, the youngest of the eight qualifiers, struck another telling blow for the new generation that is beginning to chip away at the old order.

"Wow! I'm so proud of myself today," Tsitsipas, who began the year by beating Federer at the Australian Open, said on court. "Sometimes matches like this, you wonder yourself how you overcome all those difficulties, all those break points down.

"Today's win is probably one of my best matches of this season. And these are the moments that I always wait for." 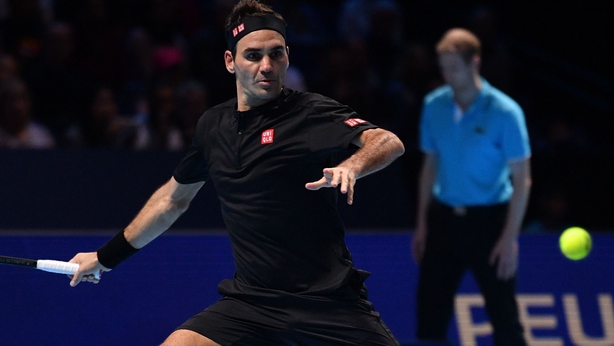 Two days ago Federer produced a majestic display to thrash Novak Djokovic and reach his 16th semi-final from 17 appearances at the ATP's exclusive year-ender.

He appeared to be making a fast start when he reached break point in the opening game, only to spoon a forehand over the baseline off a second serve.

That rather set the tone for the match and the sight of him botching two smashes in the next game had the alarm bells ringing. Tsitsipas took ruthless advantage to break with a crisp forehand winner.

A punishing 13-minute game saw a succession of stunning baseline exchanges as both players ratcheted up the power.

Federer had another break point which Tsitsipas yanked away with a courageous drive volley winner. Tsitsipas then had six set points repelled by a fighting Federer before bagging the opener on his seventh set point as Federer netted a forehand.

Looking rattled Federer dropped serve to love early in the second set with a flurry of errors but hit back immediately to finally convert a break point.

Tsitsipas barely flinched though, showing remarkable poise in the face of overwhelming support for Federer, breaking again in the next game with a belting forehand.

Federer looked jaded near the end and dug deep to hold at 3-5 and at least test Tsitsipas's nerve.

When the Greek miscued a couple of shots and trailed 15-40 it looked as though his ice-cool composure might have cracked but Federer, once again, proved charitable.

Tsitsipas battled back and finished it off with his sixth ace.