France won the Fed Cup after defeating Australia in a doubles decider in Perth.

Caroline Garcia and Kristina Mladenovic were 6-4 6-3 winners against Ashleigh Barty and Samantha Stosur to give France their third title in the women's team event, and first since 2003.

Hosts Australia were challenging for a first Fed Cup title in 45 years but were on the back foot after world number one Barty lost 2-6 6-4 7-6 (1) to Mladenovic to give France a 2-1 lead in the tie.

Fed Cup debutant Ajla Tomljanovic, overwhelmed 6-1 6-1 by Mladenovic in the opening singles match on Saturday, then won 6-4 7-5 against Pauline Parmentier to level the final and force a decider.

Also on Saturday, Barty eased to a comprehensive 6-0 6-0 success against Garcia in the second singles rubber for her 15th consecutive Fed Cup win.

Australia made a good start in the deciding rubber, taking a 2-0 lead early in the first set. However, France broke back and a number of uncharacteristic unforced errors from both Stosur and Barty saw France take the first set 6-4. 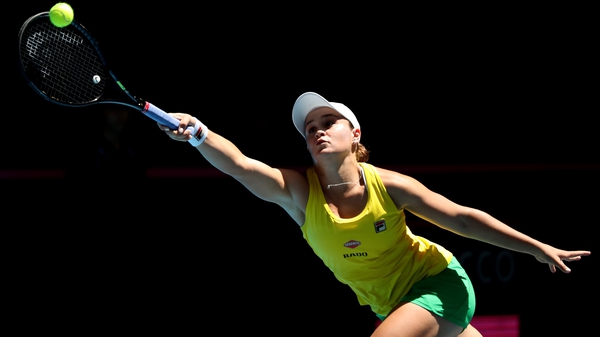 Barty flawless to keep Australia in hunt at Fed Cup