Elina Svitolina continued her dominant run against Johanna Konta with a 6-4 6-4 win on Tuesday to reach the US Open semi-finals for the first time.

The fifth-seeded Ukrainian, who has won all of her meetings with the Briton, reached her second straight Grand Slam semi-final after also making the last four at Wimbledon in July.

Svitolina's sturdy baseline attack wore down the 16th-seeded Konta, who made 35 unforced errors, 22 more than her opponent, on a sun-soaked day at Arthur Ashe Stadium.

"It feels amazing," she said of being the first player to reach the semis at the tournament this year.

"It was a very, very tough match ... I think we were both striking the ball. It was quite even," she said.

"I'm very happy with how I handled the pressure."

Svitolina rifled a backhand winner on break point for a 4-3 lead in the second set, celebrating with an emphatic fist pump in front of the crowd that included her boyfriend Gael Monfils, who plays his quarter-final on Wednesday.

Konta continued to fight, however, saving two match points on her serve, but Svitolina ended the contest in the next game when the Briton fired long. 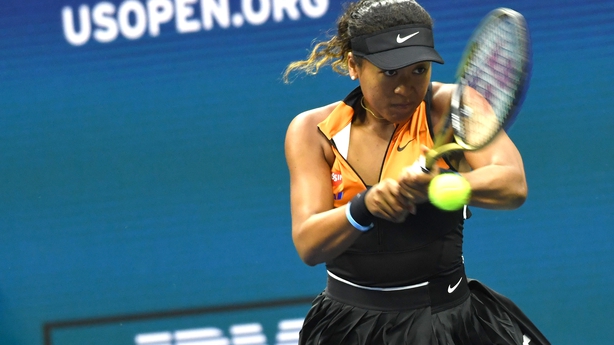 Top seed and defending champion Naomi Osaka crashed out after a straight-sets defeat by Belinda Bencic.

Osaka has been carrying a knee injury and called the trainer and a medic on midway through the second set, although she was able to carry on without receiving any treatment.

Osaka said: "I hurt my knee in Cincinnati, but it's getting better. I don't want to say that that's the reason that I lost, because I obviously had played three matches before this.

"I feel like the steps that I have taken as a person have been much greater than, like, I would imagine at this point.

"So I hope that I can keep growing. I know that if I keep working hard, then of course I'll have better results."

Her defeat came just a day after men's champion Novak Djokovic also bowed out after retiring at two sets down to Stan Wawrinka.

Osaka was cheered to the rafters as she trudged off court, a crowd favourite now after the way she consoled American youngster Coco Gauff following their match on Saturday night.

It was a third straight win for Bencic over Osaka this year, and she said: "The challenge cannot be bigger against Naomi, she won this title last year.

"I'm really pleased with my game and how I handled my nerves.

"I tried taking the serve early and trying to anticipate, because she has a lot of power. I don't hit so many winners. I try to play it a little bit like chess.

"I was in the stadium watching the (Gauff) match and thought it was an unbelievable moment for tennis. What Naomi did is what a true champion would do."

Bencic will play Donna Vekic in the quarter-final after the Croatian came from a set down to beat Julia Goerges of Germany.

Ranked 116th in the world and having clawed her way into the US Open main draw via qualifying, Townsend was the clear underdog against the 15th seeded Andreescu, who arrived at the year's final grand slam hyped as the next big thing in women's tennis.

"I have been working and dreaming of this for a long time," said Andreescu. "So it feels pretty dam good to be in the quarters.

"Every tournament I am in I expect to win but I know I have a lot of tough opponents before reaching the finals."

But Townsend, who had already knocked off Wimbledon champion Simona Halep in the second round, would not be intimidated even after being blown out in the opening set. The match was billed as a clash of styles with Townsend employing the serve-and-volley game that baffled the fourth seeded Halep going against the hard-hitting Canadian.

"She has a different game from many other people," said Andreescu. "It wasn't easy that's for sure.

"I don't normally play people like this but I made sure to work on my passing shots yesterday and I think it worked in the first and third sets.

Never before past the second round of any grand slam Andreescu has confidently navigated her way into the last eight where she will face Belgian 25th seed Elise Mertens, who blasted her way into the quarter-finals with a 6-1 6-1 demolition of another American surprise package wildcard Kristie Ahn.