Novak Djokovic described his epic Wimbledon final victory over Roger Federer as the most mentally demanding match of his career.

It was the longest men's singles final in Wimbledon history and brought Djokovic a fifth title, equalling Bjorn Borg and now just three behind Federer.

The Serbian is closing in on Federer's all-time grand-slam record, too, with his 16th title leaving him four off the Swiss and only two adrift of Rafael Nadal.

"It was a huge relief in the end, honestly," said Djokovic, who once again proved himself the master at winning the points that matter.

"These kind of matches, you work for, you live for, they give sense and they give value to every minute you spend on the court training and working to get yourself in this position and play the match with one of your greatest rivals of all time.

"It was probably the mentally most demanding match I was ever part of. I had the most physically demanding match against Nadal in the finals of Australia that went almost six hours. But mentally this was a different level, because of everything.

"I'm just obviously thrilled and overjoyed with emotions to be sitting here in front of you as a winner. It was one shot away from losing the match. This match had everything. It could have gone easily his way.

"In these kind of moments, I just try to never lose self-belief, just stay calm, just focus on trying to get the ball back, return, which wasn't serving me very well today. But, in the most important moments, all three tie-breaks I guess, I found my best game."

A final to go down in history...

With shots like this from @RogerFederer, it's easy to see why ??#Wimbledon pic.twitter.com/4MzRItnTAX

It was an extraordinary contest. The sustained quality was not the same as Federer's final loss to Rafael Nadal in 2008, which this match passed as the longest title decider, but it had more plot twists than a feature-length thriller.

Federer, who won 15 more points in the match, was the better player for all of the first four sets, with Djokovic's game strangely off colour apart from his serve, but the Swiss played two poor tie-breaks either side of a set that his opponent barely turned up for.

Djokovic's level dropped again in the fourth and, when it looked like he was finally taking control early in the fifth with a break of serve to lead 4-2, he was promptly broken back.

Federer seemed to be under more pressure but it was he who broke to lead 8-7 and at 40-15 he held two match points.

The crowd, who had been chanting Federer's name throughout, thought this was the moment but the 37-year-old netted a forehand and then was passed at the net as Djokovic broke back.

Federer had two more chances to break at 11-11 but again could not take them and his nemesis on the day, the tie-break, came back to haunt him once again. 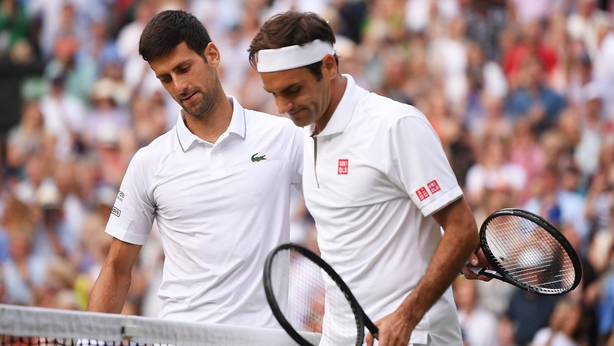 The deciding tie-break was introduced following last year's long semi-final between Kevin Anderson and John Isner and had not been needed at all during the singles tournament until this match.

Djokovic got irked by the crowd's support for opponent Roberto Bautista Agut in the semi-finals but here remained pointedly calm, the only flash of anger coming when he swiped at a chair with his racket late in the fifth set.

"When the crowd is chanting 'Roger' I hear 'Novak'," he said. "It sounds silly, but it is like that. I try to convince myself."

After beating his other great rival Nadal in the semi-finals, this was agonisingly close to the perfect tournament for Federer, who turns 38 next month and may never get a better chance to win a 21st slam title.

It was his third final defeat here by Djokovic in six years after losses in 2014 and 2015, while the match brought flashbacks of two semi-finals between the pair at the US Open, the Serbian saving two match points on each occasion.

Federer was left kicking himself at the chances he could not take, saying: "I don't know what I feel right now. I just feel like it's such an incredible opportunity missed. I can't believe it."

He held himself together admirably at the end and, although clearly stung, he insisted he would not dwell on it for too long.

He said: "Similar to getting broken when serving for the match: take it on your chin, you move on. You try to forget, try to take the good things out of this match. There's just tons of it.

"Similar to '08 maybe, I will look back at it and think, 'Well, it's not that bad after all'. For now it hurts, and it should, like every loss does here at Wimbledon.

"I think it's a mindset. I'm very strong at being able to move on because I don't want to be depressed about actually an amazing tennis match."