Novak Djokovic has warned Roger Federer that he is coming for his records ahead of their Wimbledon final on Sunday.

Djokovic, the reigning champion and world number one, has eased through to his sixth SW19 showpiece and victory over eight-time winner Federer would give him his 16th grand-slam title.

That would take him to just four behind the Swiss and at five years his junior, few would back against him going well past Federer's total.

Another record in his sight is the most weeks at world number one, another milestone Federer holds with 310.

The Serbian is currently on 260, but if he continues to dominate the men's game he could have surpassed that by this time next year.

And the 32-year-old admits he is "looking to make history".

"I don't see this as my job or as my work," he said. "I've done enough in my career so I can, you know, stop tennis, professional tennis, at any time. But I don't do it for those reasons.

"My first reason is because I really enjoy it. I still do. I have support from my family. Of course, I am looking to make history in this sport.

"Of course, I would love to have a shot at as many grand-slam titles as possible. Those are probably the top goals and ambitions. Next to that is the historic number one, which is not so far away."

This will be the fourth time Djokovic and Federer have met in a grand-slam final and the 48th they have gone head-to-head. 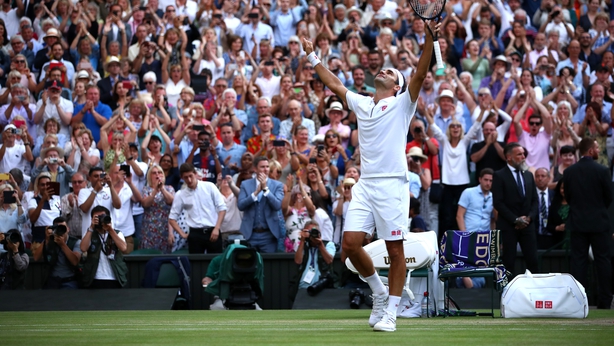 Federer, who had to beat his greatest rival Rafael Nadal in the semi-final to reach what is his 12th showpiece, knows there are not many secrets in each other's game.

"It's the same like going into a Rafa match," he said. "I think the moment you've played somebody probably more than 15 times, especially in recent years also a few times, there's not that much more left out there.

"I'm excited about the game against Novak. We've played each other so, so much. I don't mind that, I think it's more of a clear game plan.

"Especially we had a great match against each other in Paris just recently. I hope we can back it up from there."

One thing Federer will have in his favour is the unwavering support of the Centre Court crowd and that is something Djokovic will have to accept.

The Serbian lost his cool in his semi-final against Roberto Bautista Agut when the crowd were cheering in the Spaniard's favour and former British number one Tim Henman thinks that could be a factor in the match.

"Federer's got to play even better but I think the crowd will have a really big part to play," Henman said on the BBC.

"We saw even against Bautista Agut, Djokovic gets a little bit frustrated. The crowd will be massively on Federer's side.

"I think if Federer can get off to a good start, he has a chance. Djokovic is the favourite. I'm going to say Djokovic to win but I'll go five sets."