Johanna Konta was unable to take advantage of another grand slam opportunity as she suffered a quarter-final defeat by unseeded veteran Barbora Strycova at Wimbledon.

The British number one deserved huge credit for getting to the last eight at a second consecutive grand slam but, as in the semi-finals of the French Open, when the favourite's tag was on her, Konta was found wanting.

Strycova plays a similar game to her fellow Czech Marketa Vondrousova, who was Konta's conqueror in Paris, and there was an all-too familiar feeling as the 28-year-old let an early lead slip away before going down 7-6 (5) 6-1.

It was particularly disappointing coming after Konta's performances in the last two rounds, where she had recovered from a set down to defeat top-10 duo Sloane Stephens and Petra Kvitova.

Strycova more than played her part, using her full repertoire of shots and court craft to prevent Konta from getting into a rhythm.

The 33-year-old, who is ranked 54, said earlier this week it may be her final Wimbledon, and for her to move through to a first grand slam singles semi-final and take on Serena Williams is a tremendous achievement.

Konta insisted after her defeat by Vondrousova that she had no regrets but 33 unforced errors showed that this was a huge occasion where once again she was unable to bring anything like her best. 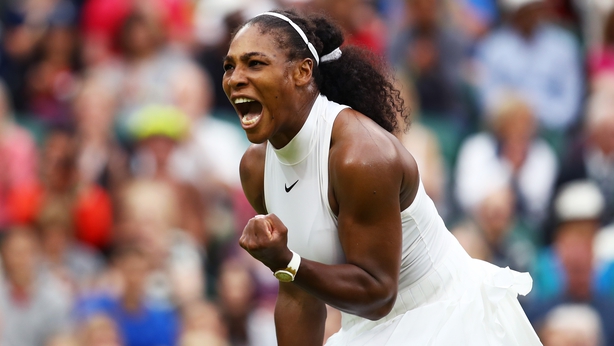 Serena Williams came through a titanic three-set tussle with Alison Riske to take another step towards an eighth Wimbledon title.

A hard-fought 6-4 4-6 6-3 victory in the all-American showdown on Centre Court ensured the 37-year-old reached her 12th semi-final in 19 appearances at the Championships.

For Riske there was no reward despite five breaks of serve - converting every single break point she created - against the 23-time grand-slam winner.

Riske, unseeded and ranked 55 in the world, had knocked out top ranked Ashleigh Barty 24 hours earlier, and she pushed Williams all the way.

Riske made a brisk start, securing the first break of serve for 2-1 despite Williams crashing down three aces.

Three games later Williams forced three break points, yet squandered the second by not challenging when her ball was called long but was, in fact, well in.

Instead she converted at the fourth attempt to level the match, before the pair exchanged further breaks. Neither player was serving badly, but both were returning superbly.

Williams stepped on the gas by holding to love and, in the crucial 10th game two Riske errors gave her two set points.

The underdog saved the first but then opted to swing at a high ball which looked likely to land out, and succeeded only in planting it into the net.

The second set rumbled on with serve until 4-4 when Riske conjured up a powerful return which smacked the baseline followed by a delicate volley, before holding to love and levelling the match.

Breaks were exchanged again twice at the start of the decider, the Americans now matching each other blow for blow until a stunning Williams volley and a Riske double-fault broke the 29-year-old once more.

Serving for the match after two hours and one minute, Williams fired down an 18th ace to pass her toughest test yet and reach the last four. 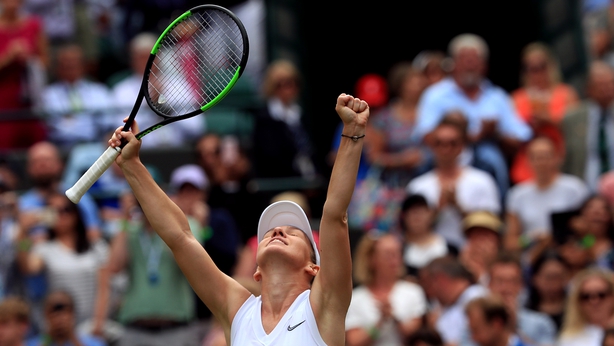 Just as she did in quelling the lively challenge of 15-year-old Coco Gauff on Monday, Halep initially struggled and looked in real danger when 4-1 down and facing more break points in the opening set.

However, the Romanian dug in to see off the threat, then played her usual percentage tennis as Zhang lost her way.

Seventh-seed Halep will now face number eight seed Elina Svitolina as she bids to reach the final for the first time having lost to Eugenie Bouchard in the last four in 2014.

"I fought hard in the first set, even if I knew I was 4-1 and she was hitting hard, I knew she would hit with a lot of power. I knew I would have to play aggressively and I did it great," she said.

"I have energy, I feel fresh and confident and I am perhaps playing my best tennis on grass."

It was 28th-time lucky for Svitolina as she finally managed to get a grip on her nerves to become the first Ukrainian woman to reach the singles semi-finals of a Grand Slam, with a 7-5 6-4 win over Karolina Muchova.

Svitolina has long been expected to join the challenge for the biggest prizes in tennis but until Tuesday, all those attempts had fallen well short.

What was surprising was that the feat was achieved on Wimbledon's rather threadbare lawns as the Ukrainian's game is more suited to the sport's slower surfaces.

"It feels amazing. It is the first semi-final for me, and I actually didn't expect it to happen here. It is exciting and I am looking forward to it already," the beaming 24-year-old said.