The sweet-spot in Rafael Nadal's racket appeared to be the size of a beachball as the Spaniard fired off winners left, right and centre to hurtle into the Wimbledon quarter-finals with a ruthless 6-2 6-2 6-2 win over Joao Sousa.

The Spaniard was not pleased when he was seeded third at the grasscourt championships, despite his status as world number two, and even less happy when the draw put him on a second-round collision course with Australian maverick Nick Kyrgios.

On Monday, however, he was all smiles as he enjoyed his quickest workout at this year's tournament, ending Sousa's bid to become the first Portuguese to reach the last eight of a Grand Slam with an ace.

He will next face Sam Querrey of the United States for a place in the semi-finals.

David Goffin is in the quarter-finals for the first time after seeing off Fernando Verdasco, also in four sets. 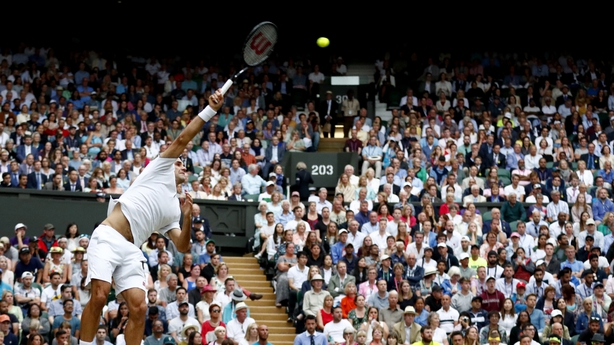 Roger Federer's 99th Wimbledon win was probably one of his easiest after he crushed 17th seed Matteo Berrettini.

The eight-time champion moved seamlessly into the quarter-finals with a 6-1 6-2 6-2 victory which took just an hour and 13 minutes.
Federer will bring up his century of triumphs if, as looks increasingly likely, he reaches the semi-finals.

Not many of the previous 98 could have been this straightforward, so powerless was Berrettini to even threaten the Swiss.

Federer was a break up inside 10 minutes, and had the first set wrapped up within 17 in a painful opening for Berrettini.

Things did not improve much for the Italian in the second, the dreaded Mexican wave breaking out as the crowd made their own entertainment once Federer had the set in the bag after three quarters of an hour.

Berrettini's humiliation was complete when, facing yet another break point in the third, he misjudged the spin on a Federer return, swatted at thin air and fell in a heap on the grass.