Novak Djokovic sailed smoothly into the third round of Wimbledon after a trouble-free straight-sets win over Denis Kudla.

The reigning champion's defence of his title was never threatened by the American and he strolled to a 6-3 6-2 6-2 win on Centre Court.

Djokovic, going for a fifth Wimbledon crown, will undoubtedly face sterner tests ahead but maybe not until the semi-finals after the draw has opened up favourably for him.

He faces Hubert Hurkacz in the next round - a Polish player who is enjoying his best ever grand slam run.

The writing was on the wall for Kudla when Djokovic won the opening five games, though a mini fightback did at least delay the Serbian racing to the first set.

Djokovic barely had to get out of second gear and broke Kudla's serve regularly to set up the easiest of wins in 93 minutes. 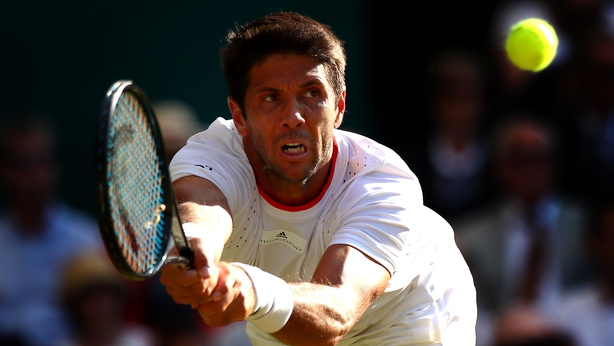 Six years ago Spain's Fernando Verdasco led Andy Murray by two sets in the Wimbledon quarter-finals only to let the British favourite off the hook and allow him to continue his journey to what would be an historic title.

On Wednesday, the feisty left-hander, found himself two sets behind to Kyle Edmund, the man with the onerous task of trying to fill the void left by Murray's absence from the singles draw.

The 24-year-old Edmund, seeded 30th, was playing the kind of dazzling tennis two-time champion Murray would have been proud of as he dominated with his clubbing forehand.

Victory looked all but assured when he moved a break up in the third set but the 35-year-old Verdasco, making his 17th appearance at the All England Club, is no quitter.

Using his own mighty forehand, the left-hander hammered his way back to win the third set on a tiebreak and with Edmund troubled by his knee, he dominated thereafter to win from a two-set deficit for the sixth time in his career.

The previous day had been a profitable one for the British contingent with the number of players through to the second round reaching seven, the most since 2006.

But the crowds wedged in watching Edmund on the big screen on 'Henman Hill' were left disappointed as his challenge faded against the world number 37. 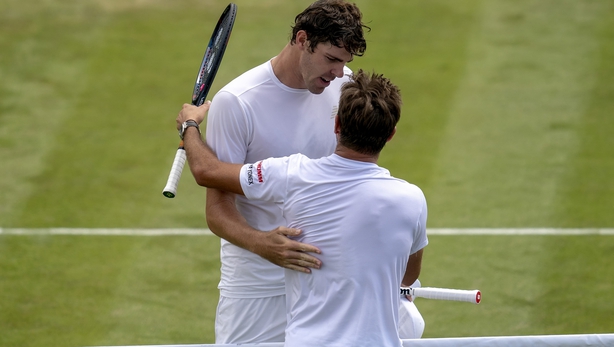 Reilly Opelka blasted his way into the third round as the giant 21-year-old American's serve eventually proved too hot to handle for triple grand slam champion Stan Wawrinka in a high-octane five set duel.

Opelka came through 7-5 3-6 4-6 6-4 8-6 against the 22nd seeded Swiss for the biggest win of his career and there will be plenty of bigger names in the draw now scrabbling anxiously for a tape of this match.

At 6ft 11in the former Wimbledon junior champion is the joint-tallest-ever ATP-ranked player (with Ivo Karlovic) and, unsurprisingly, his biggest weapon is his serve. It reached 142mph (228kph) - the fastest of the Championship so far - and, combined with some surprisingly deft court movement, is the perfect Wimbledon weapon.

Wawrinka, who has never gone beyond the quarter-finals at Wimbledon despite winning all three of the other slams and previously reaching number three in the world rankings, could not deal with it at all in the first set.

The 34-year-old eventually used all his experience to work things out and start getting it back and then treating the crowd to some of his sublime backhand winners en route to taking the second and third.

But, just as it seemed as if he would go through smoothly, Opelka found another gear to snatch the fourth.

From then on Wawrinka was having to work harder and harder to hold, while rarely threatening to break. The full match statistics showed the American successful with 73 percent of first serves compared to the 64 percent of Wawrinka and Opelka lifted that to a remarkable 91 percent in the fifth set.

Those figures proved the difference eventually as Wawrinka, at full stretch to even reach, let alone return most of them, was eventually worn down.