Nick Kyrgios may not want to go for a pint with "super salty" Rafael Nadal, but he cannot wait for their Wimbledon showdown which comes in the midst of a fascinating feud between the two.

The Australian set up a blockbusting second-round clash with the 18-time grand-slam champion after beating compatriot Jordan Thompson in five sets on Tuesday.

There are a wealth of sub-plots to the match, mainly down to the war of words that have broken out between the outspoken Kyrgios and Nadal's camp in recent months which has had as many back and forths as the crowd are likely to see in one of their rallies.

It originated in Acapulco in February where Kyrgios beat Nadal on his way to the title, bringing out an underarm serve in the three-set win, which caused the Spaniard to accuse his opponent of lacking "respect for the public, the rival and towards himself".

Nadal's uncle Toni then heavily criticised Kyrgios after he threw a chair on to the court and then defaulted, suggesting he "lacked education".

Kyrgios, who was practising alongside his opponent at Aorangi Park on Wednesday, did not let that slide, and went to town on a podcast in May, branding Nadal "super salty" and Toni an "idiot".

All of that left everyone rubbing their hands with excitement when the draw was made last week and that is before Kyrgios' win at SW19 in 2014, when he stunned Nadal in the fourth round as a 19-year-old, is taken into account.

Kyrgios was asked about the current state of his relationship with the 33-year-old and he responded by saying that they were unlikely to go for a drink in the Dog and Fox, a well-known drinking establishment in Wimbledon village, but that he was relishing meeting Nadal on court.

"As soon as the draw came out, I was super happy that I saw him in my section.

"I mean, it's more exciting. When you're a kid, you want to play the best players in the world on I think is the best court in the world.

"This is something that I can't take for granted. There's no guarantee I'm going to be here again in this position.

"I could have an injury or something like that."

On his famous win over Nadal in 2014, the 24-year-old added: "I mean, I've looked back on that moment. That's never going to leave my tennis career. It was one of the most special moments I've ever had."

It is a match that Nadal will not have wanted so early in the tournament, considering it will be only his second outing on grass this summer and that Kyrgios has won three of their six previous meetings.

Nadal knows he will have to be at his very best to get through and added a sly dig at his opponent's motivation levels for good measure.

"I play against a top talent player, very dangerous player when he wants to play tennis," he said.

"Normally against the best players, he wants to play tennis. When that happens, he's a very dangerous opponent. 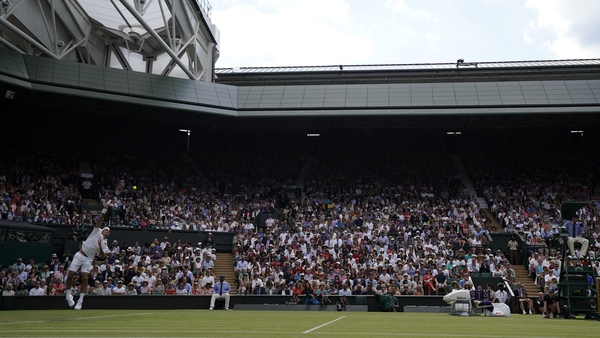 Federer, Kyrgios through at SW19, Tomic tanks out