Rafael Nadal ended the dream run of French Open debutant Juan Ignacio Londero with a typically dominant 6-2 6-3 6-3 victory on Sunday to power into the quarter-finals.

In hot and breezy conditions, the Spaniard looked once again produced claycourt tennis of the highest quality to make the last eight of a Grand Slam event for the 38th time.

The tone was set when he broke the 25-year-old Londero's serve in the second game of the Court Philippe Chatrier duel and while his 78th-ranked opponent never threw in the towel he could only try to delay the inevitable.

Londero had a break point early in the third set but Nadal stamped out that danger and broke in the very next game to close in on victory.

With his eyes fixed firmly on claiming a 12th French Open title next Sunday he seemed eager to finish the job swiftly, but after moving 4-1 ahead in the third set he dropped serve for the first time in the match.

Nadal's pace appeared to drop ever so slightly and Londero even sensed another break two games later when heavy hitting got him to 0-30 on the second seed's serve, but Nadal reeled off four consecutive points, holding with an ace.

He finished the match with a signature forehand to set up a clash with Kei Nishikori or Benoit Paire. 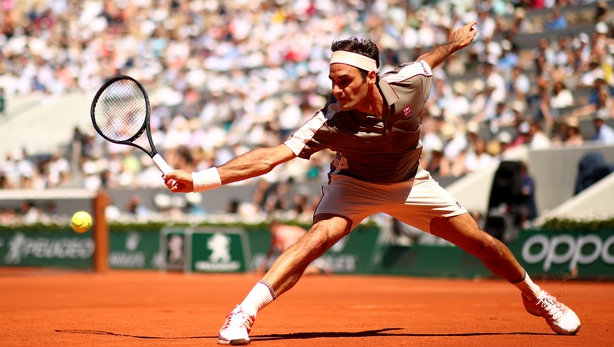 Roger Federer's dream return to the French Open continued as the Swiss waltzed into quarters by giving Argentine Leonardo Mayer a 6-2 6-3 6-3 masterclass.

The 20-time Grand Slam champion, back at Roland Garros after a three-year hiatus, cruised through the opening rounds seemingly unchallenged and his last-16 encounter was no exception.

Things are likely to get trickier for Federer from now on as the third seed will next face either a resurgent Stan Wawrinka, the champion in 2015, or Greek sixth seed Stefanos Tsitsipas who beat him at the Australian Open.

On Sunday, however, it appeared as if Federer was enjoying a leisurely stroll in the Parisian sun.

After just over an hour, Federer was already two sets up.

The 37-year-old played effortlessly, smacking winners around the court with self-confidence.

Mayer offered some semblance of resistance in the third set until the sixth game, when Federer broke decisively, ending his opponent's ordeal on the first match point.

Federer will play his old friend and rival Stan Wawrinka after the 34-year-old won an extraordinary contest against sixth seed Stefanos Tsitsipas.

The 2015 champion was twice a set up against the young Greek pretender, but Tsitsipas showed again what a superb competitor he is to fight back and it was he who looked like he would move ahead in the deciding set.

But Wawrinka dug in to save eight break points and then took his second match point when the umpire confirmed a desperate backhand had caught the edge of the line.