Last year's runner-up Sloane Stephens downed former champion Garbine Muguruza 6-4 6-3 to book her place in the quarter-finals of the French Open on Sunday.

Seventh seed Stephens struggled with her serve but she was more consistent on Court Philippe Chatrier and set up a meeting with Britain's Johanna Konta in the last eight.

The 2017 U.S. Open winner is now the clear favourite in her half of the draw after the exits of world number two Karolina Pliskova and one of the pre-tournament favourites Kiki Bertens of the Netherlands.

Stephens shook off a wobbly start by breaking back for 3-3 and she broke 2016 champion Muguruza's serve again to move 5-3 up.

The American's serve was still far from perfect, however, and she surrendered the extra break right away.

She bagged the the opening set, however, on her opponent's equally inconsistent serve.

Another break in the second set allowed her to serve for the match and she wrapped it up on her fifth match point when 19th seed Muguruza returned a second serve poorly. 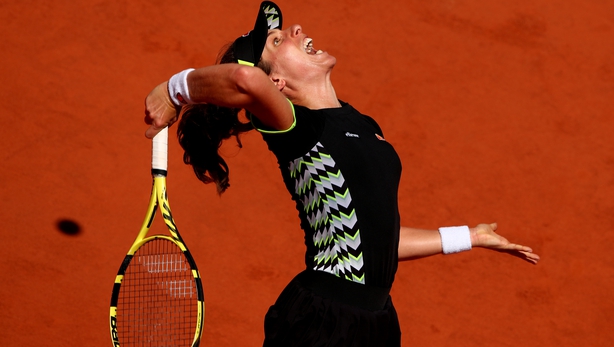 Earlier, Konta proved that she had found her comfort zone on Roland Garros' red clay as she surged to a 6-2 6-4 win over Donna Vekic to become the first British woman to reach the quarter-finals of the French Open in 36 years.

Konta, who before this year had never won a match at the claycourt major in four previous appearances, struck 33 winners, including seven aces to dispatch the 23rd-seeded Croatian on the hottest day of the tournament so far, with temperatures set to rise to as high as 31 degrees Celsius.

The last British woman to reach the Paris quarters was Jo Durie in 1983. Durie eventually lost in the semis.

Although Konta and Vekic had split their previous six encounters, including an epic clash in the second round of Wimbledon in 2017 that lasted more than three hours, this was their first meeting on clay.

After three straight breaks of serve, Konta was the first to hold, going up 3-1.

With Vekic struggling to land a first serve in, Konta went up a double break for 5-2. Serving for the first set, the Briton saved four break points before taking it with her third ace.

After swapping breaks early in the second set, a drop shot handed Konta another break. She held serve to love clinch the match in 84 minutes. 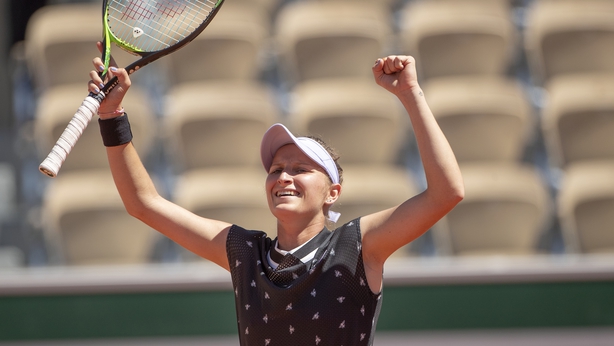 The 19-year-old Czech, who made quarter-final appearances at Indian Wells and Miami and reached the final on clay in Istanbul this season, blew the 12th seed off court with a mix of power and guile from the baseline.

Vondrousova tormented a sorry Sevastova with drop shots throughout, bagging the last nine games to advance in searing heat.

She has won all her four matches in Paris within 90 minutes and without dropping a set and on Sunday she followed up her third-round victory against Carla Suarez Navarro with another stunning display.

"I think I had tough last year because I was pretty new to tennis and to the pro scene, so it was tough for me," Vondrousova recalled.

"But now I have found a big team and great coach, so I think that helps me a lot."

She next faces Petra Martic, the woman who beat her in the Istanbul final, after the Croatian 31st seed advanced in much more laborious fashion.

Martic, who career has been hampered by back problems and slipped down to 662nd in the WTA rankings in April 2017, snatched a 5-7 6-2 6-4 win over Estonian Kaia Kanepi.

In a see-saw encounter, Kanepi broke decisively in the 12th game to take the opening set but Martic piled on the pressure as she raced through the second to force a decider.

Both players suffered early jitters as they each dropped serve twice in the first six games.

Martic saved a couple of break points at 4-3 before stealing Kanepi's serve once again to move 5-4 up and serve it out, prevailing on her first match point.