Naomi Osaka said she had never been more nervous during a tennis match after surviving a huge scare against Anna Karolina Schmiedlova in the opening round of the French Open.

The 21-year-old from Japan won both the US Open and Australian Open titles to climb to the top of the world rankings and has spoken of her desire to win all four grand slams this year.

That looked a long way away when she lost the opening set to love in just 20 minutes, and Schmiedlova twice served for the match in the second set, but Osaka dug in to win 0-6 7-6 (4) 6-1.

The world number one, who was two points from defeat at one stage, said: "I think this is the most nervous I have ever been my entire life during a match. I think you could see that in the first set. I was literally not hitting any balls in the court.

"For me, today was weird because usually the nerves go away, but it kind of stayed the entire match. Then I just felt like it was a fight of willpower. I managed to win in the end."

Asked why she was so nervous, Osaka said with a smile: "I can give you logical reasons, but I'm not really a logical person. So it might be something else.

"First time playing a grand slam as number one. Won the last two, so I kind of want to win this one really bad. I have never played on Chatrier before. And I kind of feel like I'm having the thought of wanting to prove myself again."

Osaka looked close to tears as she buried her head in a towel after being broken for 5-4 in the second set.

"The thoughts that were crossing my mind were can I sleep at night knowing that I maybe could have done something more," she said.

Osaka survived a series of close matches to win the title in Melbourne in January, and she added: "It doesn't make me feel invincible, but it does make me have hope, I guess, for the days that I do play well.

"I feel like I'm thinking too much about the number next to my name right now instead of feeling free and having fun like I normally do in grand slams, which is something that I have learned from today."

It would have been by far the biggest win of her career for Schmiedlova, a 24-year-old Slovakian ranked 90 who had lost her last nine first-round matches at the slams.

"It's not easy to win against the number one," she said. "I guess I felt it, and I didn't make it to the finish. It's not easy for my head."

The path does not get easier for Osaka, who will take on former world number one Victoria Azarenka in the second round.

Azarenka won one of the pick of the first-round clashes against 2017 champion Jelena Ostapenko, who has the remarkable record at Roland Garros of three first-round defeats and one title.

"It's going to be exciting for me," said Azarenka. "I love to challenge myself against the best players. I had some good wins in the last couple weeks so I feel that I'm ready to play against top players." 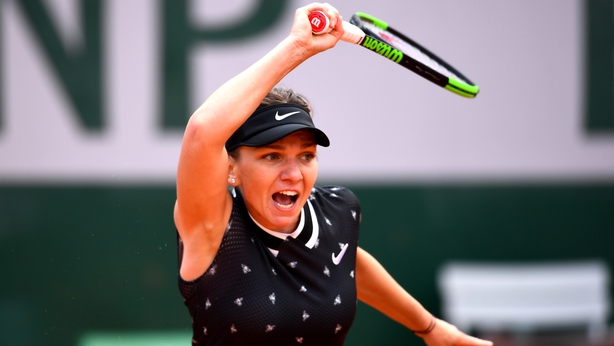 Defending champion Simona Halep followed Osaka onto Court Philippe Chatrier and was also pushed to a deciding set by Australian Ajla Tomljanovic before recovering to win 6-2 3-6 6-1.

"In my opinion, it was a great match," said Halep. "The level was great, and actually her level in the second set was really high. So I had to be focused more on myself to find out what I have to play better in the third set to be able to win.

"And then I just started to feel that if I make her move, it's a little bit better for me, so I did that."

Among the other winners was 18-year-old Canadian Bianca Andreescu, who completed a two-day 5-7 6-4 6-4 victory over Marie Bouzkova.

Andreescu produced one of the great teenage feats of recent years by winning the Indian Wells title in March but had been sidelined since the following event in Miami with a shoulder injury.