The surroundings looked slightly different but Rafael Nadal was his usual brutal self on a revamped Court Philippe Chatrier as he began his quest for a 12th French Open title on Monday.

The Spaniard blasted past German qualifier Yannick Hanfmann 6-2 6-1 6-3 before Novak Djokovic also kicked off his tournament in style with an easy 6-4 6-2 6-2 win over Pole Hubert Hurkacz.

It was not as straightforward for Serena Williams, however, as the veteran American dropped the first set against Russia's Vitalia Diatchenko before roaring to a 2-6 6-1 6-0 victory.

Caroline Wozniacki became the second former women's world number one to lose in this year's first round as the 13th seeded Dane collapsed to a 0-6 6-3 6-3 defeat by Russia's Veronika Kudermetova in the day's opener on Chatrier.

She joined Germany's Angelique Kerber who was bundled out by another unheralded Russian, Anastasia Potapova, on Sunday.

The women's draw lost another Grand Slam champion on day two when Czech Petra Kvitova pulled out with an arm injury before her match against Romania's Sorana Cirstea. 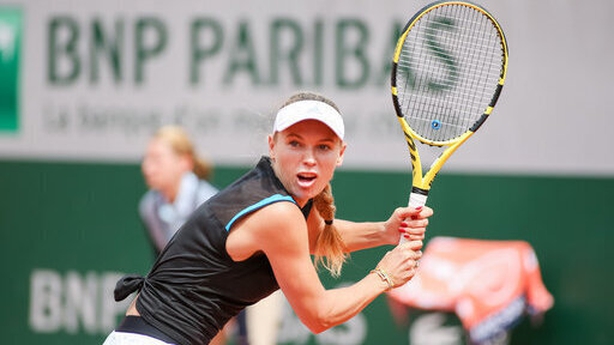 Nadal has lost only two matches at the claycourt Grand Slam since debuting in 2005 and winning the title.

It would have been the upset of all time if Hanfmann, ranked 180th in the world and playing his first Roland Garros match, had joined Robin Soderling and Djokovic on that tiny list and it never remotely looked like happening.

The Spaniard bristled with energy and menace as he went through his repertoire and, after an unusual amount of claycourt losses in the build-up to the tournament, looked razor sharp.

"I don't see any difference playing tennis here," Nadal said of the sweeping changes to the main showcourt which was ripped apart after his final victory over Dominic Thiem last year.

He will face another qualifier named Yannick from Germany in round two, this time Yannick Maden.

Djokovic's match against 44th-ranked Hurkacz looked a much tougher proposition as he began his attempt to become the first man in the professional era to hold all four Grand Slam titles for a second time.

He was clinical though and after breaking serve in the opening game he floated through to a second round clash against Swiss Henri Laaksonen.

"A break of serve in the first game gave me wings and relaxed me a bit so I could just start off in the best possible fashion," the world number one said.

Williams, who has fallen agonisingly short of winning her 24th Grand Slam title and matching Margaret Court, since returning from having a baby, looked understandably rusty after playing only one competitive match since March.

For a while it looked as though a repeat of her 2012 first-round loss to Virgine Razzano was possible, but she rattled off the last nine games to sweep past her 83rd-ranked opponent.