Rafa Nadal kept the flag flying for the old guard at the Australian Open with a 6-3 6-4 6-2 win over American Frances Tiafoe for a place in the semi-final, where he will meet another next generation player in Stefanos Tsitsipas.

Nadal's match against Tiafoe, who turned 21 on Sunday, was billed as an intriguing clash of generations after the loss of Roger Federer to Tsitsipas earlier, but the second seed was ruthless as he reached the last four without dropping a set.

The 17-time Grand Slam champion broke Tiafoe's first service game in each set and with a second break in the third set wrapped up the victory in an hour and 47 minutes.

For a place in the final, Nadal will meet 20-year-old Greek sensation Tsitsipas, who earlier became his country's first player to reach the last four at a major with a 7-5 4-6 6-4 7-6(2) triumph over Spaniard Roberto Bautista Agut.

No place on the court is safe.

Backing up breakthrough moments is notoriously difficult but Tsitsipas bucked the trend by battling to a 7-5 4-6 6-4 7-6 (2) win in three hours and 15 minutes.

The 20-year-old Greek had to dig deep on Rod Laver Arena, coming from a break down in the first and third sets before proving stronger in the fourth.

He fell to the court when Bautista Agut's final return landed in the net and can look forward to a clash against either Rafael Nadal or Frances Tiafoe on Thursday.

Tsitsipas' achievement makes him the youngest man to reach the last four at Melbourne Park since Andy Roddick in 2003 and the youngest at any slam since Novak Djokovic at the US Open in 2007.

Federer did not manage to break the Tsitsipas serve at all despite 12 chances but Bautista Agut needed only one game.

However, Tsitsipas responded well, recovering the break to make it 4-4 and then continuing his momentum to win the set. 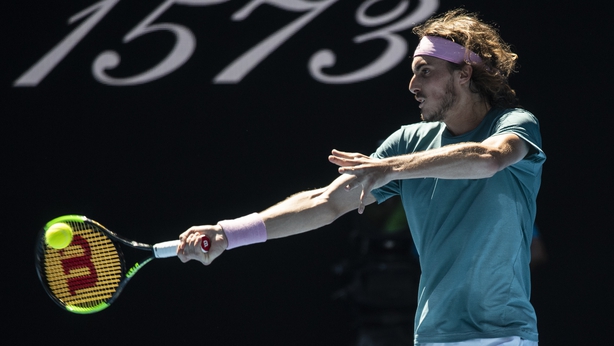 One break proved enough for Bautista Agut to win the second and it appeared his relentless baseline game may have worn down Tsitsipas when the Spaniard broke for 3-2 in the third.

But Tsitsipas continued to fight and believe, and he got his reward.

As in the first set, he broke back for 4-4 and then made it four games in a row to clinch it, putting behind him a bad forehand miss on his first set point to take it on the third with a backhand slice guided onto the line.

Bautista Agut was finally starting to look weary, which was no surprise given his run through to the last eight.

The 30-year-old needed five sets to beat Andy Murray, John Millman and Marin Cilic, with only a third-round victory over Karen Khachanov being in any way straightforward.

He won a long rally with a forehand onto the line to save a match point at 5-6 in the fourth set, Tsitsipas paying the price for playing a little too conservatively.

The Greek did not make the same mistake in the tie-break, stepping forward and going for his shots, and clinched the win on his second match point