Going head-to-head with sister Venus for the 30th time brought out the best in Serena Williams as she hit top form at the US Open.

Just before the match, Serena shared a video on Instagram from exactly a year ago when she was in labour preparing to give birth to daughter Olympia.

There will be further tests to come that will show whether she is totally back to her best, but there was little to fault as she raced to a 6-1 6-2 victory in just an hour and 11 minutes, equalling the most one-sided match in their long history.

The sisters shared an embrace at the net before a muted wave to the crowd from Serena, who will next face Estonia's Kaia Kanepi.

"It's not easy," said the 36-year-old. "She's my best friend, she means the world to me and she's so supportive of my career and I'm extremely supportive of her career. Every time she loses I feel like I lose. I love her with all my heart and she's the only reason I'm still out here. I owe everything to her."

Serena rated it her best performance since returning to the tour in March, but Venus went a step further, declaring this Serena's best ever display against her.

"I don't think I did a lot wrong," said the 38-year-old, who has had a disappointing 2018. "But she just did everything right. Obviously that level is definitely where she's going to want to stay during this whole tournament." 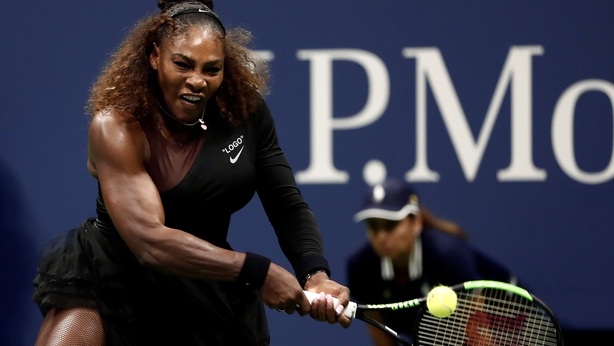 The score matched Serena's victory in Charleston five years ago, while the loser had always won at least six games in their 15 previous slam meetings. Serena now leads the overall head-to-head 18-12 and has won nine of their last 11 clashes.

Although they have got used to competing against each other, neither sister enjoys the occasion. And when the clash comes so early in the tournament - this was their earliest meeting at a slam since the first one 20 years ago - the stakes somehow seem higher.

It is decade since Venus last beat Serena at a grand slam, in the final of Wimbledon, but she had won their last match at Indian Wells in March during Serena's first tournament following the birth of Olympia.

This showed how much she has improved since then as she ruthlessly powered her way to victory.

The only real moment of alarm for Serena came in the second game when she rolled her right ankle. She took a medical time-out at the change of ends to have further strapping applied to the joint, which was already heavily taped, but insisted afterwards it was not a problem.

It certainly did not affect her tennis, with Serena reeling off seven games in a row. The crowd urged Venus to make a match of it, and she dug in the best she could but she was helpless in the face of her sister's onslaught, with Serena hitting 10 aces in a tally of 34 winners.

The loudest cheer of the night, meanwhile, came when equal rights campaigners Colin Kaepernick and Eric Reid, who are both suing the NFL, were shown among the crowd on the big screen.

"I think every athlete, every human, and definitely every African-American should be completely grateful and honoured how Colin and Eric are doing so much for the greater good," said Serena. "They use their platform in ways that is really unfathomable."

This latest meeting has been another chance to revel in the remarkable story of the sisters - for everyone but the two women themselves.

"We don't sit around and reflect," said Venus. "That's not how you get out here and win these matches. You work hard, look forward. As soon as you beat one person, there's another one standing in front of you.

"Perhaps when it's all said and done there will be a time to reflect. We're in too deep right now."