The German, who was runner-up to Serena Williams two years ago, triumphed 6-3 6-3 on Centre Court and is now one win away from a third grand slam title.

This semi-final was billed as attack versus defence and it was the solid, reliable manner of Kerber that prevailed as she let an erratic Ostapenko, who was going for winners on almost every shot, hand her a swathe of free points.

Ostapenko won the French Open in 2017 by playing in this manner and knows no other way, but she had an off day and, despite hitting 30 winners, it was her 35 unforced errors that cost her any chance of progressing.

In comparison, there were just seven errors off the racket of Kerber and that tells the story of where the encounter was won.

Kerber, who spent 34 weeks at world number one in 2016 and 2017, could be set for a rematch with Williams if the seven-time champion can get past Julia Goerges in the second semi-final.

Nobody in the women's draw has been hitting a bigger forehand than Ostapenko - with a 73mph average - which is indicative of her all-out attacking nature. 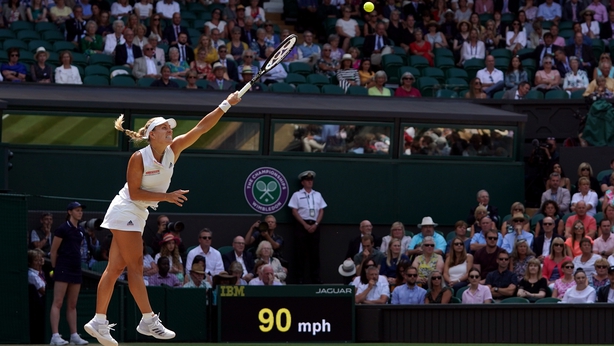 And she was not about to change her tactics here, crunching 15 winners in the first seven games.

However, the 14 errors meant that Kerber, at the third attempt, broke to lead 4-3.

Steady and solid was winning the day and Kerber, who at number 11 is the highest seed left in the women's event, consolidated the break thanks to a wide ace. Ostapenko threw four more errors into her next service game to hand the German the first set.

The Latvian stuck to her guns, continuing to go all out at the start of the second set, but her radar was way off and Kerber quickly opened up a 3-0 lead, with one break of serve.

A second break allowed her to serve for the win at 5-1 and she had a match point, only for Ostapenko to find her range and stay alive.

What it means to be in a second #Wimbledon final... pic.twitter.com/lQmwk82avu

Kerber had to fend off another break point in her next service game, but eventually got the job done to book her fourth career grand slam final.

"It is a great feeling to be in the final and playing on the Centre Court is always a great experience and I am really excited," she told the BBC.

"I am really happy and proud to be back in the grand slam final. These are the matches I was working for as a kid and to be in the final at Wimbledon is great."