Rafael Nadal ended a seven-year wait to reach the Wimbledon quarter-finals again as Roger Federer and Novak Djokovic joined him in the last eight.

Nadal's knees have struggled with the move from clay to grass in recent years but he has breezed through the draw so far and secured another straight-sets win, beating Czech Jiri Vesely 6-3 6-3 6-4.

Federer extended his run of consecutive sets won at Wimbledon to 32 in a 6-0 7-5 6-4 victory over Adrian Mannarino and still has not had his serve broken all tournament, although he was forced to save his first break points.

The first set took just 16 minutes, and Federer said: "I was also surprised it was that fast. Shouldn't really happen, but thankfully they do for me. I probably won't have another 6-0 set this week, so I'll enjoy this one." 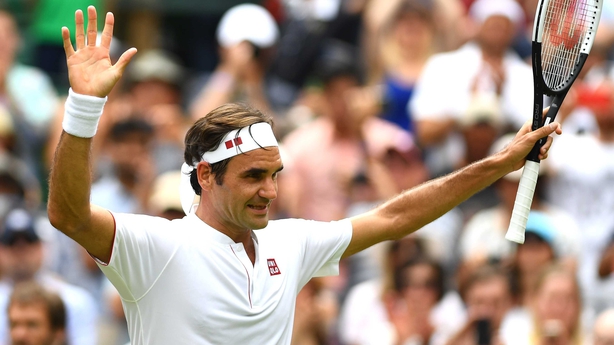 There was deja vu for Djokovic as he was forced to wait until after 7pm to begin his match against Karen Khachanov but he comfortably beat both the Russian and the light, winning 6-4 6-2 6-2.

Last year, Djokovic was furious after his fourth-round match was cancelled for the day following the epic clash between Nadal and Gilles Muller.

This time it was Kevin Anderson and Gael Monfils who held up the Serbian, who said: "Post-match I heard that the organisers were planning to cancel my match if Monfils and Anderson went to a fifth. Luckily for me it didn't happen."

Djokovic has had a difficult two years but is beginning to look and feel a lot more like his old self again.

He said: "It was quite a strange feeling for me not to be able to deliver my game that I know I possess, that I know I've been delivering for so many years. It was frustrating. But I had to trust the process. I'm still part of that process. But things are looking much better in the last month and a half."

John Isner is also through to the last eight for the first time, seven years after reaching his only previous grand slam quarter-final at the US Open. His serve proved too strong for 19-year-old Stefanos Tsitsipas in a 6-4 7-6 (12/10) 7-6 (7/4) victory.

Isner is hoping he might have some presidential support should he reach the semi-finals, with Donald Trump due to visit the UK later this week.

"I'd love to have Trump come watch me," said Isner, a supporter of the Republican Party. "That would be awesome. Maybe I'll tweet at him if I win on Wednesday. I know a lot of people won't like that, but I don't care."

Next up for the American will be a battle of the big servers against Milos Raonic, who overcame Isner's countryman Mackenzie McDonald 6-3 6-4 6-7 (5/7) 6-2 to make the last eight for the fourth time in five years.

Nadal faced a wait to discover his next opponent, with Juan Martin del Potro two sets to one up on Gilles Simon when bad light stopped play for the day.