Serena Williams charged into the last eight at Wimbledon with a straight-sets win over fellow tennis mother Evgeniya Rodina.

Williams, looking for an eighth title at the All England Club, swept away Russian Rodina 6-2 6-2 in an hour and two minutes.

The 36-year-old is playing only her fourth tournament since giving birth to daughter Olympia in September, while Rodina has a five-year-old called Anna.

Yet with so few women returning to tennis after having children, a meeting of two mothers in the fourth round of a grand slam was an unusual occurrence.

Rodina had to come through qualifying to appear at the championships, and all three of her previous matches went to three sets, so it was little surprise she seemed to be moving slowly.

Last month the 29-year-old was playing events at Manchester and Ilkley, so finding herself on Centre Court facing Williams must have felt like a daunting prospect even before the 23-time grand slam winner raced into a 3-0 lead.

Rodina managed a break of serve in the second set to level at 2-2, but Williams simply stepped on the accelerator and eased through.

American Williams finds herself as a hot favourite to claim another title on Saturday. Nine-time champion and BBC summariser Martina Navratilova said: "The seas have parted for her."

Karolina Pliskova's exit meant not one of the top 10 women's seeds reached the quarter-finals for the first time in the history of the championships.

Pliskova, the seventh seed from the Czech Republic, was the only player from the top 10 in the women's draw to make it into the second week.

However, she only lasted until Monday lunchtime, going down 6-3 7-6 (7/1) in the fourth round to 20th seed Kiki Bertens from Holland. 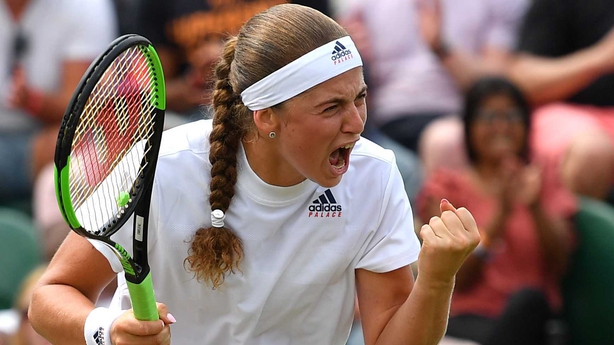 Jelena Ostapenko [above] went through after a straight-sets win over Aliaksandra Sasnovich.

Ostapenko will face Dominika Cibulkova in the last eight.

Cibulkova looks like a woman on a mission having been the player who missed out on a seeding after Serena Williams was parachuted in at number 25.

The Slovakian, who accounted for Johanna Konta in round two, beat Hsieh Su-wei of Taiwan.

There was controversy at the end of the first set when the match referee was called over an incorrect line call, which caused a delay of around seven minutes before the point was replayed.

Cibulkova took the set and the incident seemed to effect Hsieh, who was beaten 6-4 6-1. 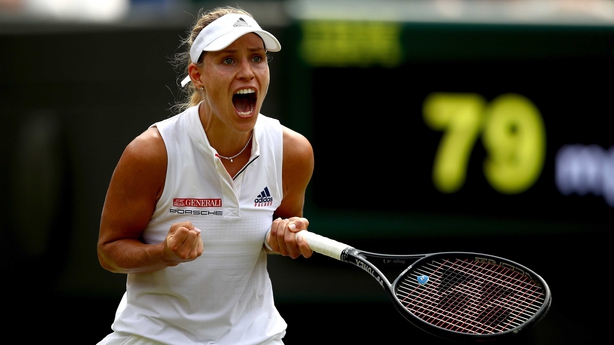 Angelique Kerber [above] is now the highest-ranked player left in the tournament.