Three-time champion Novak Djokovic silenced a raucous Centre Court crowd as he came back to beat home favourite Kyle Edmund 4-6 6-3 6-2 6-4 in the third round of Wimbledon on Saturday.

Briton Edmund was riding a wave of euphoria generated by England's World Cup quarter-final win against Sweden as he outplayed the Serbian former world number one in the first set.

But 31-year-old Djokovic, who in the 2013 final lost to Andy Murray in a similarly frenzied atmosphere, snapped out of his torpor and took charge once he broke in a pivotal seventh game of the second set.

He dominated the third set and although 21st seed Edmund was competitive again in the fourth, Djokovic broke at 4-4 and then clinically held serve for victory -- applying the seal to an impressive display with an ace down the middle.

Djokovic proved he still has the old fire in his belly too when he reacted furiously at 3-3 in the fourth when Edmund scrambled up a low ball for a winner despite replays clearly showing the ball had bounced twice.

While the 12-times Grand Slam champion is still not quite back to his best after a difficult year blighted by an elbow injury, he must now be considered a genuine threat.

"He became more and more dangerous and showed of his old self," former champion John McEnroe, commentating for the BBC, said. "The intensity and the desire were there."

The Serb, seeded 12th, will face powerful Russian youngster Karen Khachanov for a place in the quarter-finals. 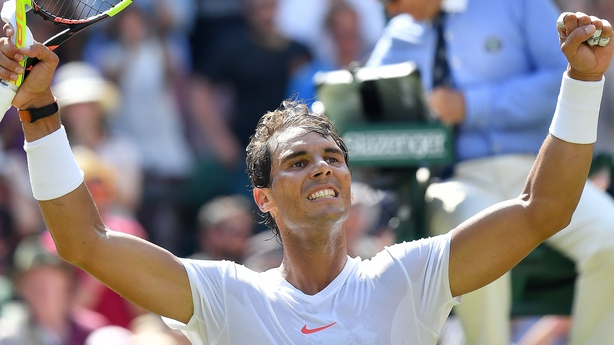 Rafael Nadal was kept on Centre Court longer than he would have liked but that did not stop him from putting baby-faced Alex de Minaur firmly in his place with a 6-1 6-2 6-4 win in the third round of Wimbledon.

The 19-year-old Alicante-based Australian played his part in an entertaining duel as he chased after everything Nadal could throw at him but the world number one stuck to his own game plan to chalk up his third successive straight-sets win.

Nadal has endured his fair share of losing to young upstarts at Wimbledon, having lost to players ranked 100 or lower in four of his five previous appearances, but there was no danger of that happening on Saturday.

His main target appeared to be getting off court before the 3pm local time kickoff of England's World Cup last-16 showdown with Sweden.

De Minaur made him play 26-minutes of extra time but the final result was never in doubt and a lunging volley winner sealed the win - and prompted a mass exodus from Centre Court as fans rushed to watch the football on their phones and tablets elsewhere in the grounds.

The Spaniard will next play either Italian maverick Fabio Fognini or Jiri Vesely as he bids to reach the Wimbledon quarter-finals for the first time since contesting the 2011 final. 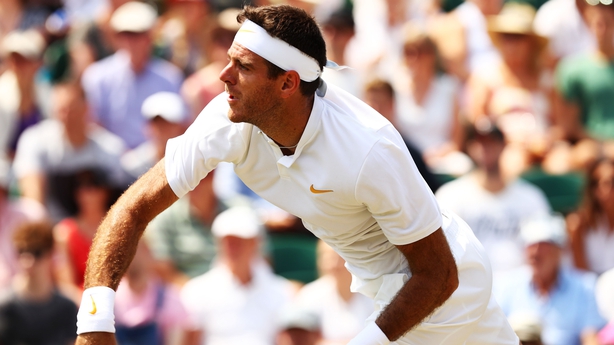 The big Argentine world number four, who has yet to drop a set, looked on for a routine win before meeting sterner resistance in the second set from Paire, who delighted the crowd with his drop shots and a break of serve to go 4-2 up.

Del Potro, a semi-finalist in 2013, immediately broke back after a slip by Paire and fears he might have hurt his heavily bandaged knee, but the Frenchman resumed and saw the set through to the tiebreak, but lost it 7-4.

The 47th-ranked Paire, who reached the fourth round last year and won his only previous meeting with Del Potro in Rome in 2013, then had a rant at the umpire after a successful challenge to an out call.

"What are you doing, it was right on the line," he shouted, evidently unimpressed with the umpire's calls.

Del Potro, looking for a second Grand Slam title after the US Open in 2009, marched into a 3-0 lead in the deciding set only to allow Paire back to 3-3 with a broken service game that included three double faults.

However, the Argentine, who had problems throughout the match serving into the sun at the northern end of the court, broke again and took it in straight sets. 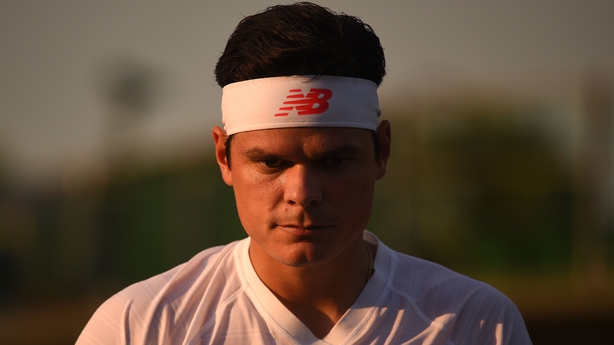 Former runner-up Milos Raonic (above) made short work of finishing off his third-round clash with Dennis Novak.

The Canadian and his Austrian opponent were forced off by darkness in the third set on Friday night but Raonic, beaten by Andy Murray in the final in 2016, secured a quick break to take the third set before dominating the fourth to win 7-6 (7/5) 4-6 7-5 6-2.

The 13th seed, who could prove the biggest danger to Roger Federer's hopes of reaching another final, will face young American Mackenzie McDonald on Monday.

Qualifier Ernests Gulbis pulled off a huge Wimbledon upset by knocking fourth seed Alexander Zverev out of the tournament.

Latvian Gulbis had a brief moment as the 10th-ranked player in the world four years ago but has slipped to 138th and needed to win three matches just to get into the main draw in London.

He followed up wins over British youngster Jay Clarke and Bosnian Damir Dzumhur with a tremendous victory over fast-rising German Zverev, as a 7-6 (7/2) 4-6 5-7 6-3 6-0 success carried him through to the fourth round.
Zverev, 21, was clearly tired in the final set and was picked off ruthlessly by his 29-year-old opponent.