Simona Halep reached her third French Open final, and held on to the world number one spot, with a straight-sets victory over Garbine Muguruza.

It will be the 26-year-old Romanian's fourth appearance in a major final, having also lost to Caroline Wozniacki in Australia in January.

Halep feels better equipped to finally break her duck in Paris. She said: "I have more experience now.

"I feel calm. I feel that I have to enjoy it today, the victory, because it was a great match.

"Then I have two more days until I play the final. So I will stay chilled. I will relax. We will see what is going to happen Saturday, but for sure I will fight for every ball."

Muguruza had thrashed Maria Sharapova in the quarter-finals but Halep was a different proposition entirely, and it seemed she knew it.

A nervous start from the Spaniard was immediately pounced upon by Halep for a break in the opening game.

Half an hour later 1-0 had become 6-1 and the challenge of Muguruza, who would have taken over at the top of the rankings with a victory, appeared to be fading fast.

She improved in the second set, breaking early on only to be pegged back at 4-4 before Halep held a marathon ninth game and broke for a 6-1 6-4 win.

"I started in the first set not matching her level," said Muguruza, the reigning Wimbledon champion.

"She was playing incredible right away, and I think I should have done something a little bit better to not let it go so fast." 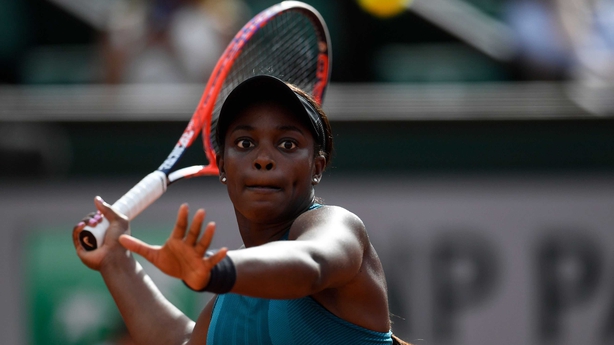 Stephens beat her fellow American and great friend Madison Keys 6-4 6-4 in a repeat of last year's US Open final.

That match was also won, comprehensively, by Stephens for her first grand slam crown.

This was a less clear-cut victory but an early break of serve in each set put Stephens in control.

Keys slipped two breaks down in the second but although she pulled one back Stephens served out for the match.

"It's always hard to play someone from your country, and such a good friend, so I'm pleased to get through that," said Stephens.

"It will be another great opportunity on Saturday and I'm really looking forward to it."