Rafael Nadal admitted the rain saved him from a shock French Open defeat.

The 10-time champion needed a downpour on Wednesday evening to rescue him from a deluge of break points, five of which were converted by tricky Argentinian Diego Schwartzman.

Nadal, the undisputed king of clay, had lost his first set at Roland Garros since 2015 and was a break down in the second, but he regrouped during a 53-minute delay.

When the players came back on for half an hour Nadal had rediscovered his serve and found his forehand, until at 5-3 30-15 the heavens opened again.

By Thursday normal service had resumed, the Spaniard reeling off the two points he needed to level the match, and then polishing off two more sets to crush this particular French revolution and secure his place in the semi-finals.

"Of course the stop yesterday helped because it was in a tough moment of my match," said Nadal.

"He was playing great, and I was playing too defensive. I felt that I was playing a little bit under more stress than usual, and he was able to take control of the point too many times.

"I played more aggressive. I continued the level of intensity that I played after the first stop. And, in my opinion, the match changed."

Nadal's serve was picked apart by Schwartzman on Wednesday, but the world number one conceded just one point from his first three service games.

He was inconvenienced by a couple of break points as he served for the third set with 11th seed Schwarztman, a 5ft 7in live wire, refusing to go away quietly.

But, unlike the previous day Nadal's forehand was firing again and he was the one dictating the rallies.

Schwartzman, a nuisance to the end, forced break points as Nadal served for the match but the 32-year-old eventually wrapped up a 4-6 6-3 6-2 6-2 victory to take another step towards title number 11. 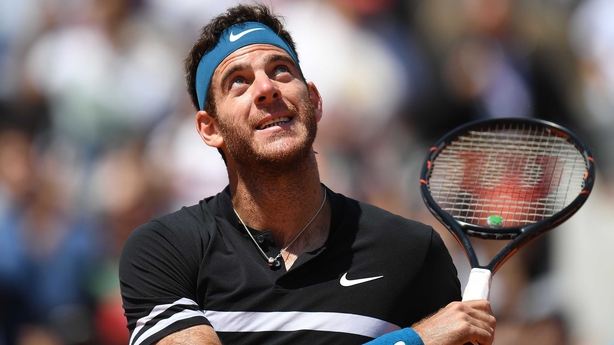 In the semi-final he will meet Juan Martin del Potro, who came through a predictably attritional battle with third seed Marin Cilic in four sets.

The pair were locked at 5-5 in a first-set tie break when the rain came, and it was fifth seed Del Potro who took the first two points upon the resumption to draw first blood.

After 22 games without a break of serve three came along at once, two for Croatian Cilic as he took the second set.

In the third Del Potro was broken again early on but then reeled off four successive games to get his nose back in front.

The fourth set went hurriedly with serve until 5-5, when from out of nowhere Del Potro fashioned three break points.

Afterwards a tearful Del Potro said on courtside: "It's tough to speak now.

"It has been a long time without a good feeling in my body. I have had three surgeries on my left wrist and I was close to quitting. I don't have any words.

"It's so good for my team and my family. I am so proud to be playing tennis. I feel at home here. Merci beaucoup!"