Spaniard Nadal, bidding for an 11th title on the Parisian clay, also trailed by a break in the second set as Schwartzman threatened a huge shock, but after a rain stoppage, Nadal returned to court to move 5-3 ahead in the second set.

Another rain delay sent the players off court and shortly afterwards play was suspended for the day.

They will return on Thursday morning.

Nadal had looked imperious on his way to a 12th quarter-final at Roland Garros, but the diminutive Schwartzman played with aggressive intent to rock the claycourt king.

Breaks were swapped twice in the first set before 25-year-old Schwartzman broke the Nadal serve for a third time to lead 5-4. Schwartzman saw two set points come and go but at the third time of asking, after a delay while a spectator was helped out after feeling ill, the Argentine ripped a forehand winner. 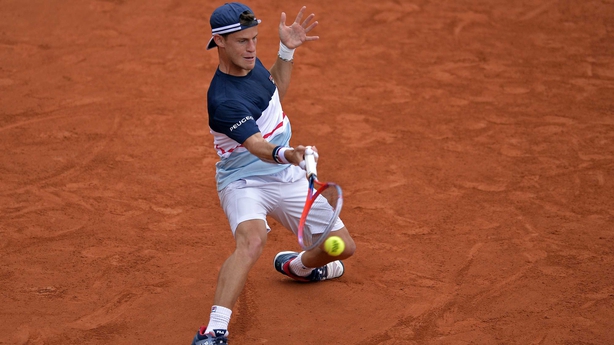 When Schwartzman broke in the third game of the second set, the alarm bells were ringing in the Nadal camp and although he quickly levelled he was immediately broken again.

Schwartzman had a point to lead 4-2 but a forehand error allowed Nadal off the hook.

That proved costly as Nadal broke and then repeated the trick to move into a 5-3, 30-15 lead.

There will be much to ponder though for Nadal and coach Carlos Moya as Schwartzman still looked capable of registering a first win against Nadal at the sixth attempt.

The winner will face either Juan Martin del Potro or Marin Cilic, who were locked at 5-5 in a first-set tiebreak.