Petra Kvitova came within three points of falling in the first round of the French Open before three successive aces and her nerves of steel carried her to a 3-6 6-1 7-5 win over little-known Paraguayan Veronica Cepede Royg on Monday.

The Czech, who suffered career-threatening injuries on her playing left hand after being attacked in her home by a knife-wielding intruder in December 2016, arrived in Paris on the back of an 11-match winning streak.

But Cepede Royg came close to snapping that run as she edged 5-4 and 0-15 ahead on Kvitova's serve in the third set.

But the woman who proved even her surgeon wrong by coming back to play top left tennis just five months after the attack unleashed three successive aces to survive that scare.

She was soon saluting the crowd with a raised clenched-fist as she broke in the next game before wrapping up victory to set up a second-round meeting with Spain's Lara Arruabarrena. 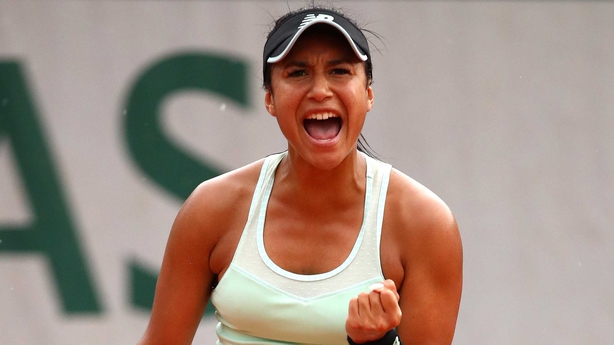 British number two Heather Watson shrugged off her recent poor form to reach the second round for the sixth time.

Watson arrived at Roland Garros having lost nine of her previous 10 matches, and looked nervous as she dropped her opening service game.

But Watson broke back for 2-2 and as Dodin's error count begin to creep up she went on to take the opening set.

Dodin's game then fell away completely to virtually gift Watson a free pass into the next round.

The Dane will next face Spanish qualifier Georgina Garcia Perez, who knocked out Dalila Jakupovic 6-3 6-4 to claim her first main draw victory at a grand slam.