Jelena Ostapenko's reign as French Open champion came crashing to a halt in the first round at Roland Garros.

The Latvian, who was unseeded when she roared through the draw to claim her shock triumph last year, was beaten in straight sets by Ukrainian Kateryna Kozlova.

Ostapenko, seeded five, looked a shadow of the player on the Court Philippe Chatrier upon which she shone so brightly 12 months ago.

Venus Williams was also sent spinning out on the opening Sunday.

Wang, ranked 85, had lost to Williams in the first round in Paris last year and also at Wimbledon a few weeks later.

But she gained revenge in spectacular style with a first victory over the seven-time grand slam winner for the biggest win of her career.

"I think she just played well.," said Williams.  "I mean, all the times we've played, she's played great. I think her game just got better and better during the match." 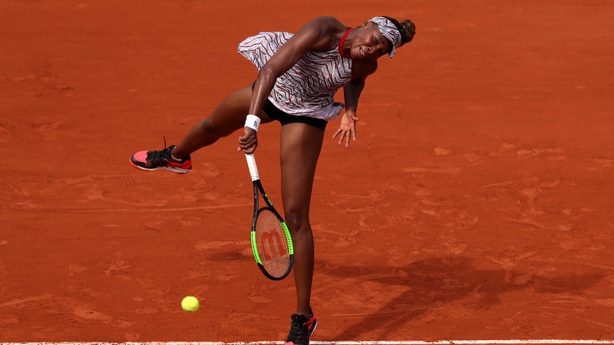 Williams was the first big name to tumble out of this year's tournament and was soon joined by Great Britain's Johanna Konta.

The 22nd seed crashed 6-4 6-3 to Yulia Putintseva of Kazakhstan, a player ranked 71 places below her.

Fourth seed Elina Svitolina recovered from 5-1 down, saving a set point, to blow away Ajla Tomljanovic of Australia.

The Ukrainian won eight games in a row - frustrated Tomljanovic's racket was an early Roland Garros casualty - on her way to a 7-5 6-3 victory.

US Open champion Sloane Stephens was clearly in a hurry, dropping just two games in a 6-2 6-0 win over Arantxa Rus of Holland.