Ireland have ended day one of their Davis Cup Europe/Africa Zone Group 2 first round match away to Denmark tied at one rubber apiece.

Carr was first in action and had his chances in the first game and was unable to convert two break points which gave Nielsen a chance to settle in to the match. In the fifth game of the first set Nielsen saved a further three break points and started to build momentum from here and broke Carr soon after to take a 5-3 lead. He served out to take the set.

The Irish player came out fighting in the second set. It was nip and tuck and not much opportunities given by both players in the early exchanges. 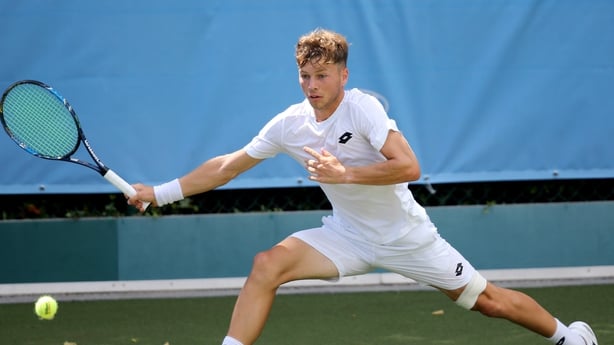 Nielsen was very solid throughout the match and proved very dangerous anytime he approached the net. Mid way through the second set Nielsen broke Carr to go 4-3 up and held serve in the following game to serve for the match. To his credit Carr broke Nielsen in this game and brought it back to 5-5.

Both players held out serves in the subsequent games which brought the set to a tie-break. Nielsen showed his experience and took the tie-break 7-2 to claim the victory.

Both players in the second match eased themselves in to the match by holding serve up until Bothwell was broken by Olesen to make it 5-3 to the Dane in the first set. Bothwell showed his resilience and never say die attitude by breaking back immediately. It looked as if it was heading for a tie break until Olesen stepped up to break his opponenr for a second time to claim the set 7-5.

Bothwell had a new lease of life in the second set and steamrolled Olesen to take it 6-1. He then marched to a 2-0 lead at the beginning of the third set only to be clawed back by Olesen who wasn’t giving up without a fight.

Both players steadied themselves and at 3-3, Olesen was starting to feel the pressure from the home crowd. Bothwell took advantage of this and went on to win three games on the bounce for victory.