Irish Junior tennis player Simon Carr is through to the last 16 in the US Open.

Simon, son of former Dublin Gaelic football player and manager Tommy, is competing in his fourth and final Grand Slam of 2017 at Flushing Meadows in New York and recorded his best performance in progressing through to the third round.

The 17-year-old needed to bring his ‘A’ game to the match today to be in with a shout of matching his 6’8’’ opponent from France and that’s exactly what he did as he recorded a straight sets victory 6-4 6-4 over Jaimee Floyd Angele.

His opponent in the next round is Timofey Skatov from Russia who earlier defeated Jurij Rodionov the no 3 seed from Austria in straight sets. 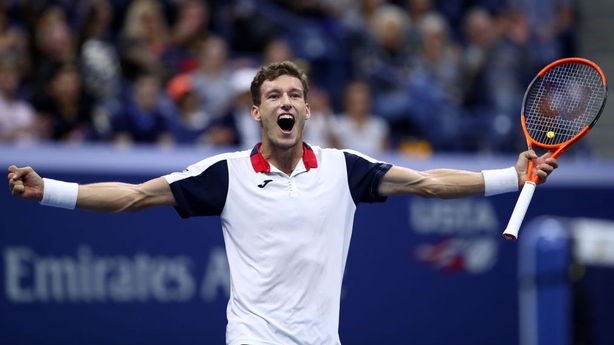 The 12th-seeded Spaniard, the highest-ranked player left in the bottom half, proved too solid for his opponent, winning 6-4 6-4 6-2.

Having reached his first slam quarter-final at the French Open earlier this summer, Carreno Busta will now take on Sam Querrey or Kevin Anderson for a place in the final.

The 26-year-old dropped his racket and pumped his fists in celebration, and he said: "It's incredible. It's something that I always dreamed of but never think I can arrive here.

"It's very exciting to be in the semi-finals. It was a very good match today. I tried to be focused all the time, Diego is a fighter. You need to be aggressive all the time and try to dominate the points."

Carreno Busta had the easier run to the quarter-finals, beating four qualifiers all in straight sets, and he almost certainly benefited from his extra freshness.

Schwartzman was playing in the last eight at a slam for the first time after upsetting Marin Cilic and Lucas Pouille.

But he struggled with a leg problem against Pouille and ultimately could not quite match the consistency of Carreno Busta.

It was a closer match than the scoreline suggested but, as in his fourth-round victory over Denis Shapovalov, Carreno Busta played the big points superbly.

The Spaniard saved eight of the 10 break points he faced while taking six of eight chances on Schwartzman's serve.