Karolina Pliskova needed just 46 minutes to race into the quarter-finals of the US Open with victory over Jennifer Brady.

The world number one had struggled in her last two matches and had to save a match point against Zhang Shuai in the previous round.

But this was much more like the player who defeated both Williams sisters to reach her first grand slam final at Flushing Meadows 12 months ago.

Poor Brady, an American through to the last 16 here for the first time, barely got a look in as she was routed 6-1 6-0.

Pliskova admitted she has been struggling with the pressure of having the number one next to her name but she got off to a good start here and played freely.

By the time the pair shook hands, Pliskova had thumped 23 winners, won 92 per cent of points on her first serve and made just nine unforced errors. 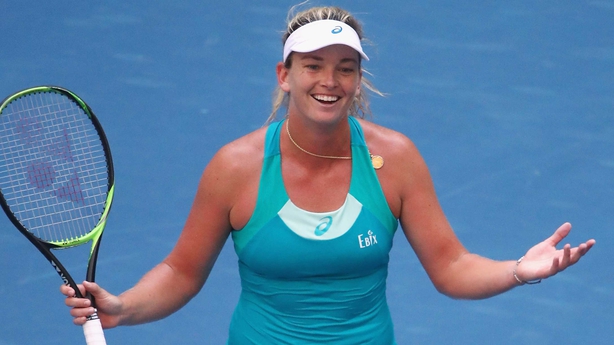 Pliskova's next opponent will be 20th seed Coco Vandeweghe (above), who reached her third grand slam quarter-final of the season with a 6-4 7-6 (7/2) victory over Lucie Safarova.

The 25-year-old made it all the way to the semi-finals in Australia before losing to Venus Williams and also made the last eight at Wimbledon.

Vandeweghe is supremely confident and divides opinion, and it appears there is no love lost with Pliskova.

Asked about the similarities in their games, the Czech said: "Obviously I think it's the speed of the shots, but otherwise, I would not really put me and her together. Like not even personally.

"We both have the plan to play aggressive, but I think she's a little bit, not messy sometimes, but she's just going for her shots. Even if she misses five metres out, she doesn't care, so it's different. It's not my game style."

Qualifier Kaia Kanepi continued her brilliant run in New York with a 6-4 6-4 victory over Daria Kasatkina.

Kanepi is no stranger to the latter stages of grand slams but has plummeted down the rankings because of injury and illness and needed to use her protected ranking just to enter qualifying.

Seven matches later, the Estonian will face either fourth seed Elina Svitolina or Madison Keys in the last eight. 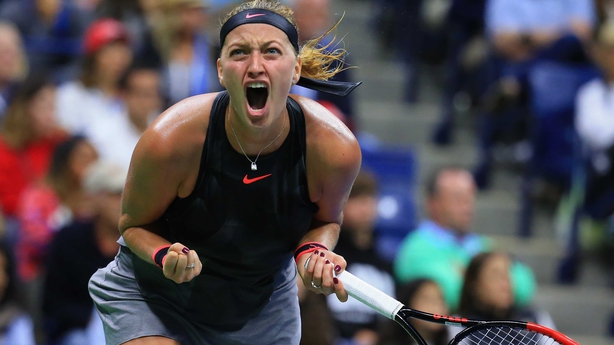 With Wimbledon champion Garbine Muguruza knocked out on Sunday night by Petra Kvitova (above), this now appears a golden chance for Pliskova to win her maiden grand slam title.

Kvitova established herself as a contender for what would be the most remarkable of titles after defeating Muguruza.

It was the most significant match since Kvitova's comeback from the horrendous hand injuries she suffered when she was stabbed by an intruder at her home last December.

And the Czech reminded everyone just what an unstoppable force she is in full flow with a stunning 7-6 (7/3) 6-3 victory over the clear title favourite.

Kvitova admitted to nerves in the final game, where she had to save three break points, roaring herself to victory.

"It was the kind of moment that I dream of to come and play again on the big stages against great players on the tour," she said. "That was one of the motivations to be back.

"So probably in my mind was just there, thinking about it. I didn't really play these kind of great players so far in the season when I came back. It was something really special for me.

"I knew how everything was just so tight and very close, every game that we played in the end of the match. I just knew it would be about a few points."

This is only the second time Kvitova has made the quarter-finals at Flushing Meadows and she has never been further.

Big time tennis on display from a handful of matches today at the #USOpen! pic.twitter.com/yS1BjZsl10

The 27-year-old, who next faces Venus Williams, insisted she will continue to play with no expectations but also without being surprised by what she can still produce.

She said: "I'm not thinking like that any more. I think maybe it's a bad sign sometimes, that I should be more appreciating than I am probably.

"But sometimes I just really feel that the touch is there, the strength, the aggressive kind of game plan. It took me while to find it. Luckily I found it in a grand slam.

"The women's race is still very, very open. Of course, Garbine was one of the favourites to win the title and be number one. I'm sorry, I'm not sorry I beat her. I'm still happy that I'm in the tournament. But anyone from the draw can win the title here."

Muguruza was so confident, so assured after her brilliant summer and looked to have too much consistency for Kvitova when she eased into a 4-1 lead.

The turning point came in the next game. Muguruza had chances to go 5-1, could not take them, and slowly Kvitova began to turn the screw.

A missed volley and double fault cost Muguruza the tie-break and she could not turn the momentum back in her favour.

The 23-year-old could yet finish the tournament as world number one, with Elina Svitolina needing to reach the semi-finals or Karolina Pliskova the final to deny her.

And, whatever happens, Muguruza will leave New York in a positive frame of mind, saying: "I'm very happy with the tournament.

"Even though today didn't go my way, I didn't feel I did something wrong out there. I think she played very good. We all know she can play, finding the incredible shots and serve.

"Overall it's a very good tournament for me. Not only a tournament, but the summer in general. I feel very happy. This match is just a match, but I'm happy with all the period that I've been playing."

Muguruza buckled under the weight of expectation after winning her first grand slam title in Paris last summer but is embracing the pressure this time.

"I like it," she said. "If people think I could be a good competitor there and go far, that's fine. Of course, I feel these butterflies and things like this. But I go out there, I do my best, and that's all."

At the age of 37, Williams is having her most consistent season at grand slam level for 15 years.

After reaching the final of both the Australian Open and Wimbledon and the fourth round of the French Open, she made it an unhappy birthday for Carla Suarez Navarro with a 6-3 3-6 6-1 victory.

Williams has not won a grand slam title since 2008, while the second of her two US Open crowns came way back in 2001.

The American, like everyone in tennis, was shocked by Kvitova's ordeal and has been inspired by her comeback.

"What she's gone through is unimaginable, unreasonable," said Williams.

"The world we live in is just shocking. So for her to be playing well is such a blessing. To be able to come out here and do what she needs to do, to clear her head, it's such a beautiful thing to see."