Angelique Kerber's battle to hold on to the world number one spot got off to a smooth start as she opened her Wimbledon campaign with a 6-4 6-4 win over Irina Falconi.

After a poor first half to 2017, where she has so far failed to claim a title, the German must match her 2016 achievement of reaching the final to hold off competition from Karolina Pliskova, Simona Halep and Caroline Wozniacki for the top position in the rankings.

She arrived at Wimbledon with little form to speak of after losing in the first round at the French Open, pulling out of the Aegon Classic in Birmingham with an injury and then losing to Johanna Konta in the Aegon International in Eastbourne last week.

But, having the honour of opening play on Centre Court due to defending champion Serena Williams' absence, she progressed in straightt sets against the American.

Kerber will hope it reignites a return to the sort of form that won her two grand slams last year.

Anastasia Pavlyuchenkova became the biggest casualty of the women's championships so far when she lost a three-set thriller to Arina Rodionova.

Pavlyuchenkova, seeded at number 16, becomes the highest-ranked woman to be dumped out so far. 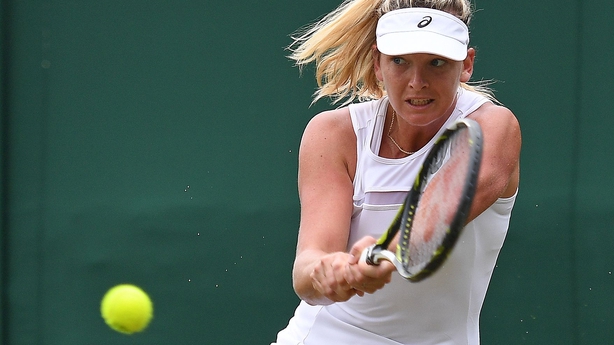 Vandeweghe, 25, reached the Wimbledon quarter-finals two years ago and the Australian Open semi-finals at the start of this year.

She also beat Konta emphatically in Birmingham just two weeks ago, to suggest she could be a Wimbledon title dark horse.

The number 24 seed served eight double faults against Barthel in a performance that was more erratic than she would have hoped for, but 30 winners also came from her racket in her 7-5 6-2 win.

And there was another American success early on day two, as Bethanie Mattek-Sands shook off a slow start to win 1-6 6-2 6-3 against Poland's Magda Linette.

Mattek-Sands notably beat Petra Kvitova in round two of the French Open in late May.

The 32-year-old, better known for her doubles play and often extravagant outfits than her singles results, was handed a wild card to Wimbledon.

Kiki Bertens, the 23rd seed, was a first-round casualty as the Dutchwoman lost 7-6 (7/4) 7-5 to Romanian Sorana Cirstea.