Margaret Court has claimed she is a victim of a US-led conspiracy following calls to remove her name from one of the arenas at the Australian Open.

The 74-year-old Australian, a 24-time grand slam singles champion turned Christian pastor, has been criticised this week over her controversial comments on gay marriage, homosexuality and transgender people.

One of the main show courts at Melbourne Park, the venue for the Australian Open, is named after Court and Martina Navratilova has been among those to call for it to be renamed, while Australian number one Sam Stosur said players could choose to boycott the arena at next year's tournament.

There's a lot of money behind it, and it's coming from America."

In response to those calls, Court told Melbourne's 3AW radio: "I think I've won more grand slams than any man or woman and if it is (renamed), I don't believe I deserve it.

"They could probably get 100,000 petitions in 24 hours because that's how they work. There's a lot of money behind it, and it's coming from America."

Asked whether she thought there was a conspiracy, Court added: "Yes, I believe there is... I think the (gay) lobby, yeah. They are a minority in number but they do have a lot of money behind them."

Court has hit the headlines with her vocal opposition to same-sex marriage while she told a Christian radio station on Wednesday that transgenderism was the work of the devil and compared a global plot to promote equal sexual rights to Hitler. 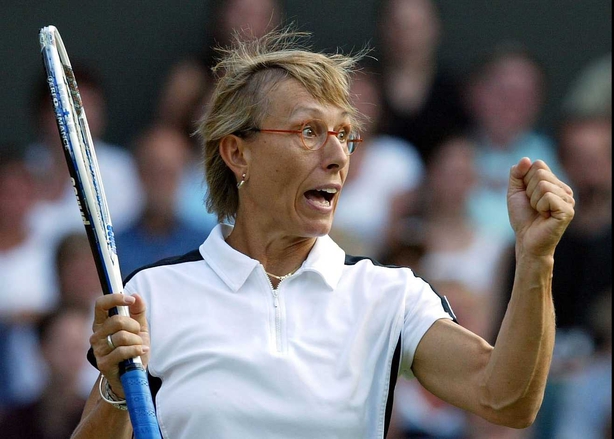 Former world number one Navratilova (above), who is a prominent advocate for LGBT rights, has led the criticism against Court, labelling her comments as "sick and dangerous", while those tennis players willing to give their views on the controversy have universally condemned the Australian's attitude.

Court believes she is being bullied. "There has been a lot of bullying the other way. They are taking my tennis and trying to destroy me through my tennis. I am a target and that is all right," Court said.

"My nephew, with the Margaret Court tennis academy in Albury, he's had his computers just trashed and he is a wonderful young man. I know I am being targeted,I didn't come down in the last shower.

"I don't want any more of it. Enough's enough but they will keep doing it and it's very militant and it's sad to think that. But really, I have nothing against them."

On Navaratilova - who has called for the Melbourne Park arena to be renamed in honour of Australia's seven-time grand slam singles champion Evonne Goolagong Cawley - Court says she should focus on events closer to the 60-year-old Czech-American's home.

"I have nothing against Martina, she is being used as a frontrunner, but she needs to sort out her nation, not worry about ours."

"Martina needs to look at her own country, not our country, she is not up with the times of what I am doing in the community," she said.

"She is out of date with what I do and I think she is trying to get her point across in our country. She has lost touch with the times.

"I have nothing against Martina, she is being used as a frontrunner, but she needs to sort out her nation, not worry about ours."

Tennis Australia has distanced themselves from Court's comments but there is no suggestion at this stage that they will rename the arena in Melbourne Park.