Karolina Pliskova is learning to love the French Open after reaching the third round for the first time.

The Czech is the second seed in a wide open women's field but has struggled to translate her results on hard courts to clay.

She had won just two matches in five previous visits to Roland Garros, and is still searching for her best form.

But a 6-2 4-6 6-3 victory over Russia's Ekaterina Alexandrova set up a third-round meeting with German Carina Witthoeft.

"I'm not really happy still with the way I was playing. I would say a little bit better than the first round but the opponent was different so she was playing much faster. The serve saved me in the third set."

Pliskova made her grand slam breakthrough with a run to the US Open final last summer, beating Serena Williams before losing to Angelique Kerber.

She followed that up by making the quarter-finals of the Australian Open and winning a title in Doha.

"The US Open and Australian Open gives me some confidence," said Pliskova. "So it doesn't have to be that I played the best tennis but at least I feel like I'm there and I'm fighting and not scared that I'm going to lose.

"Last year I was also coming as a favourite, not as second seed but everyone is still expecting me to win something, and I didn't make it. I lost in the first round. So even the first round means a lot to me.

"What I did today, it's kind of special still. I have a chance. I know I can play better if I go deep in the tournament."

While Pliskova breaks new ground, fifth seed Elina Svitolina is trying to live up to her billing as the best player of 2017.

The Ukrainian shot to the top of the yearly standings by lifting the Italian Open trophy in Rome just before the tournament, and she kept her title hopes alive with a 3-6 6-3 6-2 victory over Tsvetana Pironkova.

Svitolina said: "I think today was actually my confidence that brought me to win this match, because probably if I would be struggling a little bit, it would be really tough, because she was striking the ball really well.

"I just tried to stay calm and tried to build my way into the match and find my game." 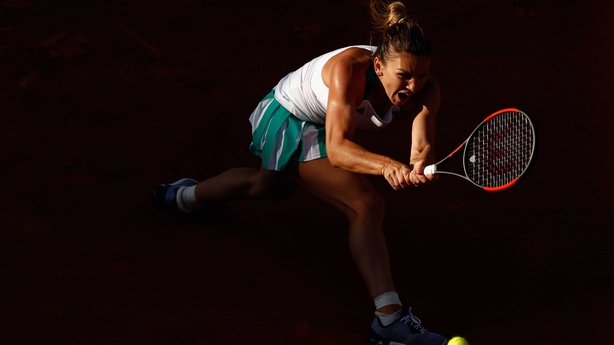 Title favourite Simona Halep is putting worries over her ankle injury behind her and defeated Germany's Tatjana Maria 6-4 6-3 but it was a different story for Eugenie Bouchard.

Like Halep, the Canadian is nursing a torn ligament and she was brushed aside 6-3 6-0 by 17th seed Anastasija Sevastova.

"I really didn't feel like I was moving well," said Bouchard. "And that affected my whole game and allowed her to really control the ball.

"I've been trying my best to even play this tournament, and I'm happy I won one match. But yesterday I could barely practise. I just tried to play because it's a slam, but it's something I need to take time right now to rehab."

Agnieszka Radwanska came from a set down to beat Alison van Uytvanck 6-7 (3/7) 6-2 6-3 while there were also wins for French duo Caroline Garcia and Alize Cornet.