Dominic Thiem showed why he is one of the favourites for the French Open title with a first-round hammering of Bernard Tomic.

The Austrian is the only player to have beaten Rafael Nadal on clay this season and, along with German Alexander Zverev, is regarded as the most likely challenger to the old guard.

This was a good draw for Thiem because Tomic struggles on clay and, after he put early nerves to one side, the sixth seed raced through 6-4 6-0 6-2.

"It was very hot out there, so I'm happy that I won in three sets," said Thiem, who reached the semi-finals at Roland Garros last season.

"It was a tough opponent and a close first set. I was also a little bit nervous before the match, and because of these circumstances I'm happy with my performance. 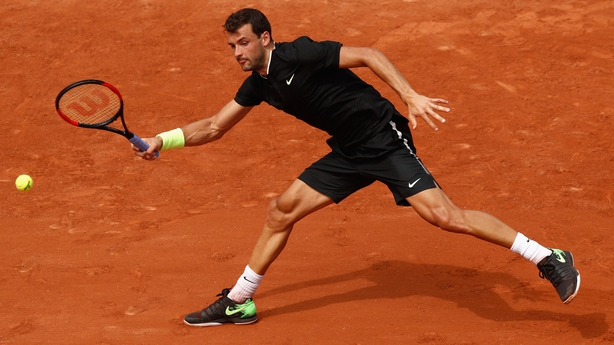 Grigor Dimitrov had not won a match at the French Open since 2013 but eased to a 6-2 6-3 6-4 win against Frenchman Stephane Robert on Court Philippe Chatrier.

"I was sure that question was coming," chuckled the Bulgarian.

"It's great. I'm so happy. It's always good to win that first match, especially at any slam, but here for the past three years I haven't been able to win a match.

"I like my chances out here. I like the clay. One of the first times passing by the grounds a week ago, I was just like, 'Wow, I'm back here again. Come on. This year is different'."

Nineteenth seed Albert Ramos-Vinolas, who has had an impressive clay-court season, came from a set down to beat Marius Copil while 38-year-old Ivo Karlovic made experience count against 18-year-old Stefanos Tsitsipas, winning 7-6 (7/5) 7-5 6-4.

Third seed Stan Wawrinka will not start his tournament until Tuesday but arrived in Paris in buoyant mood on Sunday after successfully defending his Geneva Open title at home in Switzerland.

The 2015 champion is once again under the radar after a mixed season despite nearly always producing his best at the slams in recent years.

Wawrinka said: "The early season on clay was not good. It really had a negative impact on my confidence. So being able to win matches was very important.

"Playing well, winning matches is great, but when you don't win matches it's very difficult to get the confidence. I think in Geneva I was finally able to find that confidence again."

Nadal and defending champion Novak Djokovic both begin their campaigns on Monday.