Roger Federer has shifted his focus to the second half of the season, revealing that he will an eight-week breather until the French Open after the latest chapter of his remarkable 2017 ended with him winning the Miami Open.

The 35-year-old's success in Florida, coming with a straight-sets victory over Rafael Nadal, means he has won the biggest three tournaments of year, following titles at the Australian Open and Indian Wells - all after missing the final six months of last season with a knee injury.

Federer has confirmed he will now skip the majority of the clay-court swing and not play another tournament until the French Open, which begins on 22 May, but his attention is already on the third grand slam of the year five weeks later.

"Wimbledon has to be the biggest goal now," Federer, who last won at SW19 in 2012, told reporters.

"The American hard courts, I guess, as well. The French Open, to some extent, we will see what happens, there is no pressure there really.

"All the grass is important to me. The second part of the season is the big priority.

"My knee was strange on the clay last year, so maybe being away from it as much as possible is a good thing as well, even though I don't think it was because of the clay as such.

"But my physio, my fitness guy, thought that could be a good thing not to be too much on clay. I feel very comfortable, very confident it is the right decision.

"I will probably stay on hard courts for the next few weeks and I will get on the clay two weeks before the French. Hopefully, I will play the French, and then for me that's when the season really starts." 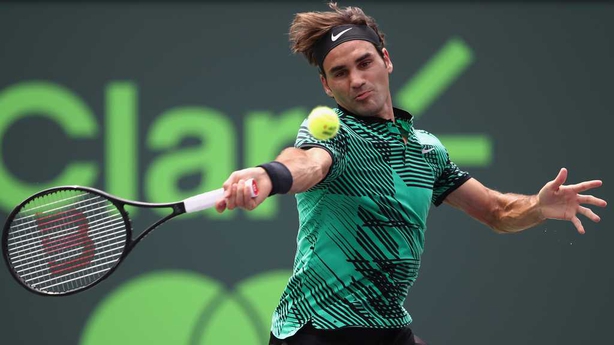 Federer's stunning start to the year means he can cherry-pick his schedule for the rest of 2017. And with over 4,000 ranking points already in the bag and no points to defend after Wimbledon, a return to the world number one spot is a strong possibility.

"For me, the dream continues. It's been a fabulous couple of weeks here in Miami, Indian Wells was beautiful as well," he added.

"Of course I'd like to thank my team as well. What a start to the year, I can't believe it."

For Nadal it was a fifth loss in the Miami Open final, the first of which came against Federer in 2005.

He said: "It's disappointing for me that I have been trying during all my career. Every three years, I am here in this position but always with the smaller trophy.

"I am going to keep trying hard for the next couple of years. Hopefully I will not have to wait three more years to be in that position fighting again for the title."