Top seed and reigning champion Angelique Kerber was bundled out of the fourth round of the Australian Open by big-hitting American Coco Vandeweghe, losing 6-2 6-3 on Rod Laver Arena.

The 25-year-old New Yorker claimed a place in the quarter-finals at Melbourne Park for the first time, blasting six aces and 30 winners to overpower Kerber.

"I guess I faked (having confidence) a lot because I was feeling like crap out there," said the American.

"But, you know, fake it 'til you make it' .... my game plan was to execute knowing that she was going to get a lot of balls back."

The world number 35 smashed a backhand crosscourt winner to take the single break of serve she needed to claim the opening set in 33 minutes.

Kerber, who also won the US Open last year, hit back by breaking her American opponent on a double fault in the opening game of the second set but Vandeweghe would not be denied.

Taking advantage of a series of uncharacteristic Kerber errors, Vandeweghe ramped up her big forehand to break back for 3-3 and another backhand gave her the opportunity to serve for the match.

Kerber was by now looking broken and sealed her fate, and Vandeweghe's victory, when she looped a return far beyond the baseline.

Venus Williams was not prepared to even countenance the suggestion she could potentially meet younger sister Serena in the final after she advanced to the quarter-finals with a 6-3 7-5 victory over Mona Barthel.

The 13th-seeded Venus had some struggles against the German qualifier but clinched the crucial points to advance to a last eight clash with Anastasia Pavlyuchenkova.

Serena, who has won 22 grand slam titles to her sister's seven, is on the other side of the draw and faces Barbora Strycova in their fourth round clash on Monday and has looked the most comfortable of the players left in the tournament.

As such, a potential ninth showdown in a grand slam final, and second at Melbourne Park, between the American sisters could potentially be on the cards, though Venus sidestepped the question after her victory over Barthel. 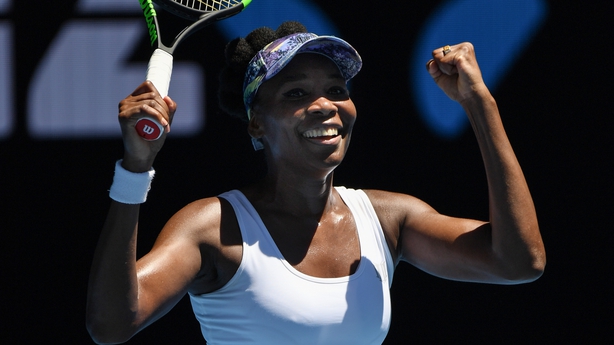 "That could hopefully happen," the 36-year-old Venus said when asked of the possibility. "We both still have to work very hard to get there.

"Today I played a qualifier, and she hardly ever missed. So it doesn't matter who you come up against, they are coming and they want to win, too. They have nothing to lose.

"I'm going to be focused on winning one round at a time and focus on doing what it takes to be there."

Williams made a fast start against Barthel as she raced out to a 3-0 lead but the 181st-ranked German fought back with the American having trouble with her ball toss at the northern end of the court as she looked directly into the sun.

Barthel broke twice to give her the opportunity at 4-3 to get back on serve but Williams capitalised on the German also having trouble with the sun to break back then served out from the Yarra River end to clinch the first set in 42 minutes.

The second set went on serve until the 11th game when Williams broke for the first time in the set, then, despite serving from the northern end, clinched victory in 96 minutes.

Her next opponent, Anastasia Pavlyuchenkova, completed a personal tally of reaching every grand slam quarter-final as she steamrolled eighth seed Svetlana Kuznetsova 6-3 6-3 to reach the last eight.

The 25-year-old, who had never advanced beyond the third round at Melbourne Park, made it to the quarters at Roland Garros and the U.S. Open in 2011 and at Wimbledon last year.

"I'm kind of shocked a little, but also so happy," says the Russian 24th seed, who has beaten three compatriots and a Ukrainian at Melbourne Park this week. "I think we were both a bit nervous but we played last week in Sydney and I won.

"I've been practising hard, working hard and enjoying it."

Spanish seventh seed Garbine Muguruza wasted no time beating Romania's Sorana Cirstea 6-2 6-3 in an hour and five minutes to advance to the quarter-final. 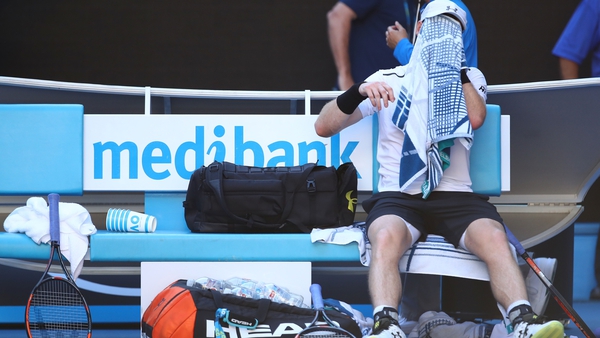 Out of sorts Murray crashes out of Australian Open, Federer through