Serena Williams believes two tough opening matches will stand her in good stead at the Australian Open after she beat Lucie Safarova to reach round three.

Williams had needed three sets to beat Safarova in the French Open final two years ago but this time she won 6-3 6-4 against the Czech on Rod Laver Arena.

Safarova was the second tricky opponent Williams faced in Melbourne after she was paired with up-and-coming Swiss player Belinda Bencic in round one. She beat Bencic 6-4 6-3.

"It's not ideal. But at the end of the day, when I play players like Bencic and Safarova, they force me to play better," Williams said.

"It forces my game from the very first day to be at a high level so I think it's actually good.

"I needed something to start really fast so I'm not going to complain about it."

Williams will face fellow American Nicole Gibbs for a place in the last 16, with Gibbs only managing to win only three games when they last met at Stanford in 2012.

The 22-time grand slam singles champion also looks in ominous form, having delivered a typically clinical display against Safarova, which included 35 winners, 15 aces and not a single break of serve conceded.

In another early shock at the tournament, third seed and former semi-finalist Agnieszka Radwanska was knocked out of the second round  by Croatia's Mirjana Lucic-Baroni, becoming the highest seed to fall in the women's draw at Melbourne Park.

The world number 79 Lucic-Baroni left Radwanska and the  Margaret Court Arena crowd stunned with a 6-3 6-2 defeat of the Pole in the late afternoon match.

Former Wimbledon finalist Radwanska, who reached the semi-finals at Melbourne Park last year and in 2014, managed only eight winners to her opponent's 33 and slumped to her earliest exit at the year's first grand slam since her first round elimination in 2009. 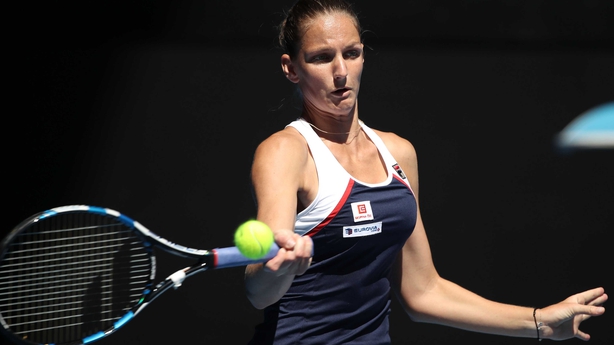 Serena Williams may have become engaged over the New Year but Karolina Pliskova emerged from the Australian Open second round on Thursday demonstrating she was ready to step out of the shadows as a grand slam bridesmaid.

Last year's US Open finalist produced an effortless performance against Russian qualifier Anna Blinkova, to back up a impressive showing in her first round victory over Spain's Sara Sorribes Tormo.

Such was her dominance on Margaret Court Arena it was as if she was taking the Russian's surname literally, as the 18-year-old did not get on the scoreboard until the fifth game of the second set before the Czech wrapped up victory in 59 minutes.

"I'm feeling pretty good on the court, confident," Pliskova said after the 6-0 6-2 victory. "Even (if) the opponents were not that high level, I would say, but still, I felt pretty good out there."

Pliskova, however, was not prepared to send 'save the date' cards yet, even if pundits were suggesting the tall Czech should be someone that Williams and defending champion Angelique Kerber should be casting wary glances at as the tournament progresses.

"Third round is going to definitely more tough than the first two," Pliskova said of her clash with Latvia's Jelena Ostapenko.

"People are talking I have a good chance to win a grand slam, but we are just in third round, so let's see."

Pliskova, however, was not the only grand slam finalist to emerge as potential challengers to the German top seed and American six-times champion on Thursday.

WTA Finals winner Dominika Cibulkova and former world number one Caroline Wozniacki both safely advanced into the third round with relatively comfortable victories.

Watson missed all five opportunities to reach round three in a tense deciding set, lasting 86 minutes, having also served for the match when leading 5-4 in the second. 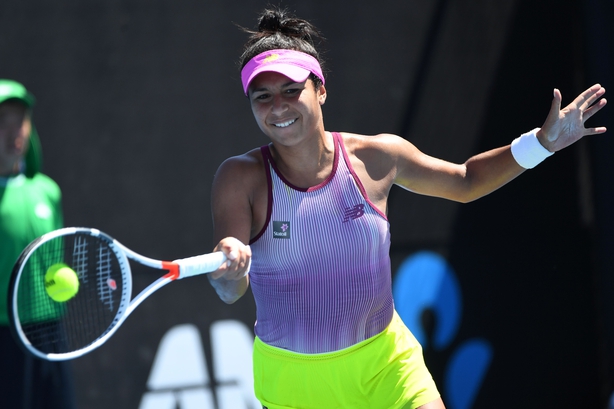 The British number two allowed nerves to get the better of her on Court 13, however, as Brady snatched a shock 2-6 7-6 (7/3) 10-8 victory in her first ever grand slam main draw.

Watson, ranked 81st in the world and 35 places above her opponent, was strong favourite to equal her own best run at a major tournament, particularly after knocking out Australia's Samantha Stosur in round one.

The 24-year-old has a tendency, however, to become embroiled in grinding three-setters and she simply lacked the ruthlessness here to close out a contest she certainly should have won. 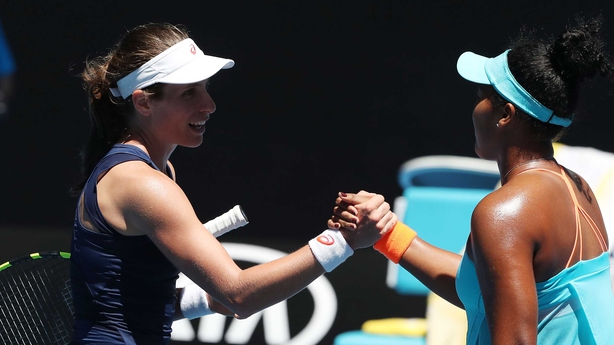 Johanna Konta underlined her status as a genuine contender for the title by thrashing Japan's Naomi Osaka to reach the third round.

Osaka is widely considered a future star of the women's game but the 19-year-old was handed a lesson in ruthless efficiency on Rod Laver Arena as Konta stormed to a 6-4 6-2 victory.

After a scrappy opening performance against Kirsten Flipkens on Tuesday, this was the British number one back to her best and in the sort of form that will have the draw's biggest names taking notice.

Konta will now face either the resurgent Wozniacki, who made the US Open semi-finals in September, or Croatia's Donna Vekic for a place in the last 16.