Andy Murray was in impressive form as he gave Russian teenager Andrey Rublev a lesson in to reach the third round of the Australian Open with a 6-3 6-0 6-2 win on Wednesday.

Only a nasty tumble in the third set on Rod Laver Arena stalled his march to victory and the top-seeded Briton said the right ankle he rolled on was "a bit sore" at the end of the contest.

"I don't know how bad it is," said the 29-year-old. "Just normally if it's something like severe, a serious ankle injury, you can't put weight on your foot.

"It just a little bit stiff just now. It's okay. I don't think I've done too much damage. See in the morning how it feels when I wake up. But hopefully it will be all right."

Five-times a losing finalist at Melbourne Park, Murray had laboured through his opening round victory over Illya Marchenko in the full heat of the opening day of the tournament.

Wednesday's performance in the evening of a much cooler day was of a far higher calibre.

The Wimbledon and Olympic champion was in clinical form, smashing 29 winners and ensuring that the 19-year-old Rublev was unable to get a single break point on his serve.

"I was able to get myself up to the net more. I served way better, too. That helps you and allows you to dictate more points.

"Second serve was harder than the other day. Yeah, most things were better tonight. But still think I can improve." 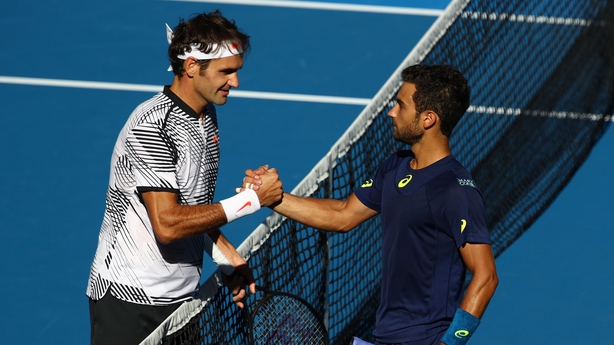 A straight-sets win in just over two hours hardly sounds like cause for dejection but Federer's fitness and usual finesse both appeared lacking here, against an opponent ranked 200th in the world, playing only the fifth grand slam match of his life.

Evans stunned Cilic with a 3-6 7-5 6-3 6-3 victory in what was his first ever grand slam success against a top-10 player and the biggest shock of the Australian Open so far.

Next up for Evans in the third round is a date with Australia's big-serving but temperamental Bernard Tomic.