Defending champion Angelique Kerber battled her nerves and blew a match point in the second set before finally overcoming Lesia Tsurenko 6-2 5-7 6-2 to reach the second round of the Australian Open.

The top seeded German was starting the defence of a grand slam title for the first time and made harder and longer work than she might have of advancing to a meeting with compatriot Carina Witthoeft.

"I was actually feeling not too bad," the 28-year-old said after basking in the applause on Rod Laver Arena, where she beat Serena Williams last year to win her first grand slam title.

"From the beginning, I was trying to play my game. I played a good match. There was a little bit where I didn't play too good. I make some simple mistakes in the second set, at the end of the second set.

"But first round matches are always tough."

Kerber perhaps had good reason to fear the embarrassment of becoming only the second woman to fall at the first hurdle in her title defence at the Australian Open.

She had spoken before the tournament about feeling the pressure after her stellar 2016 season, during which she won two major titles, reached the Wimbledon final and became world number one.

Knocked out in the first round at Melbourne Park two years ago, even last year Kerber was match point down against Misaki Doi in her opener before recovering to reach the final.

After losing the first six points of the match, though, Kerber gradually found her range and proved too strong for Tsurenko, who was reduced to scrapping to save her serve and the odd pearl of a consolation point off her rasping backhand.

The nerves returned when Kerber was serving for the match, however, and the world number one angled a backhand into the net on her single match point before her Ukrainian opponent broke back for 5-5.

World number 51 Tsurenko grasped her opportunity with both hands and broke the Australian and US Open champion again after a marathon nine-minute game to send the contest into a decider.

The third set developed into a battle of wills but lefthander Kerber grabbed the key break for a 4-2 lead before rattling off the next two games to advance after more than two hours on court.

"I think it's always good to have a match like this in the first few rounds," said Kerber. "I mean, it's always tough for everybody to get the rhythm and to start the tournament, especially the grand slam, the first grand slam of the year.

"So I think it was not so bad to have a match like that in the first round." 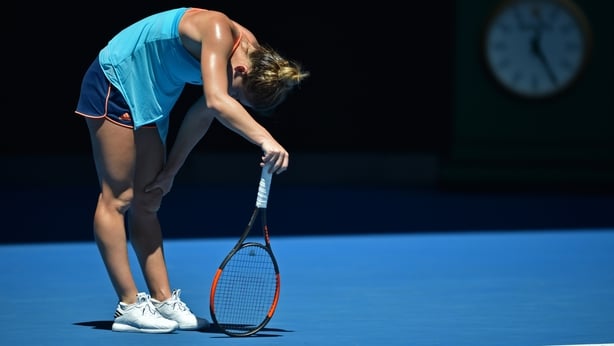 Earlier, Simona Halep fell victim to the first shock of the tournament after the number four seed was dumped out by American Shelby Rogers.

Halep had been one of the favourites to challenge for the title but the Romanian was beaten 6-3 6-1 by Rogers in the tournament's curtain raiser.

It is the second year running Halep has endured a first-round defeat here after she lost to Japan's Shuai Zhang 12 months ago. Rogers goes through to meet either Australian wildcard Ashleigh Barty or Germany's Annika Beck in round two.

An analysis conducted by Tennis Australia's data team had Halep as the fastest female player on the circuit but she was powerless to resist Rogers, who hit 26 winners and managed four breaks of serve.

After the match, Halep admitted she was hindered by a bout of tendinitis, which had affected her left knee since the WTA Finals in October.

"Definitely she played well. I think she played a very high standard. I had pain at my knee," Halep said.

"I tried. I had some anti-inflammatory before the match, and the previous days. But when you have the tension of the match, official match, the pressure, it becomes harder.

"So I had harder pain and I couldn't do what I wanted."

Rogers, ranked 52nd in the world, has only once before played in the Australian Open main draw and on her last meeting with Halep, at the 2015 US Open, she lost in straight sets.

"I think I played great, trying to be aggressive," Rogers said. "My game plan worked. Just move forward, hit your shots, be really aggressive. When I'm doing that, I am playing well."

Garbine Muguruza and Venus Williams avoided similar upsets but both were made to work hard as Muguruza edged past Marina Erakovic 7-5 6-4 while Williams beat Kateryna Kozlova 7-6 (7/5) 7-5. 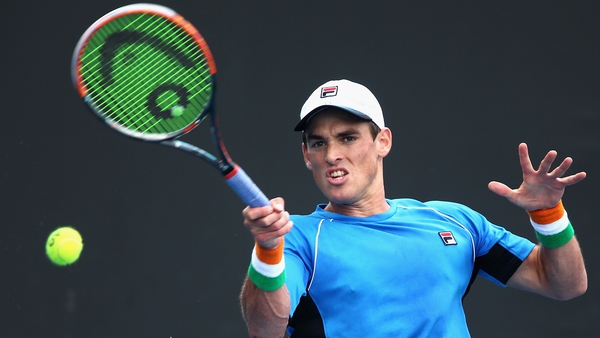