Venus Williams fell painfully short of a ninth Wimbledon final appearance as she failed to fire in a straight-sets semi-final defeat by Angelique Kerber.

After sister Serena coasted to victory over Elena Vesnina in just 49 minutes, it fell to Venus to make it a fifth all-Williams family final at the All England Club.

Yet she was off her game and Kerber did enough, without needing to be at her best, to take a 6-4 6-4 victory in an hour and 13 minutes.

Left-hander Kerber sealed victory with a sizzling cross-court forehand pass, and will be bidding to become Germany's first women's singles champion at Wimbledon since Steffi Graf took her seventh title in 1996.

Looking ahead to her first appearance in the Wimbledon trophy match, the 28-year-old fourth seed said: "It's just amazing.

"To beat Venus in the semi-finals ... it's always a tough match against her. She's a champion and she's won so many times here.

"That's why I'm really happy about my game and my first final here at Wimbledon."

Kerber, yet to drop a set in the tournament, told the BBC: "I think right now I have a lot of experience from my last few years on tour and I'm enjoying my tennis life at the moment.

"I'm just happy to be in my second grand slam final."

Kerber beat Serena Williams in the final of the Australian Open in January, and Saturday's re-match looks appealing.

"I will just try to go out there with a lot of confidence, trying to play my best tennis and trying to give everything I can in the final."

What a way to reach your first #Wimbledon final

Match point of The Championships? https://t.co/7yMQlV9weI

Despite suffering from the auto-immune condition Sjogren's syndrome, there are few players quite as athletic as veteran Centre Court queen Williams.

This was her first Wimbledon singles semi-final since 2009, and first at any grand slam for six years, and at the age of 36 Williams was the oldest woman to reach this stage in SW19 since a 37-year-old Martina Navratilova in 1994.

Kerber knew the key to the match was her own serve, which had looked fragile in the quarter-finals against Simona Halep.

And while there was room for improvement on that front, it was more potent than the Williams delivery.

Although the contest was spiked with moments of semi-final quality, neither player could hold serve initially, with the first five games each going the way of the receiver.

The trend relented when Williams framed the ball out of court on Kerber's second game point in the sixth, to slide 4-2 adrift. Another trade of breaks followed, before Williams held serve for the first time in the ninth game.

But she then dumped a forehand into the net on Kerber's second set point, and it looked a long way back from there.

The 12 unforced errors from Williams in the first set was twice her opponent's total.

Williams made a dreadful start to the second set by immediately dropping serve and making no inroads against Kerber's ball. While she improved from that point on, it came too late. 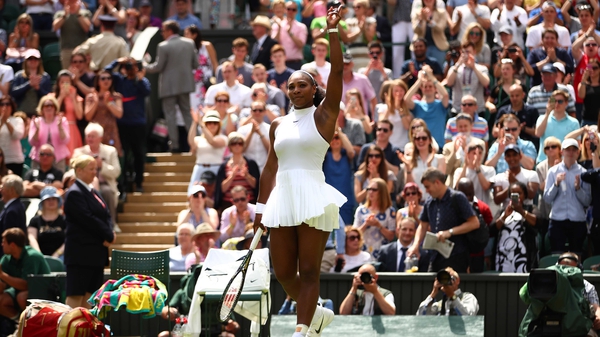