Andy Murray's second stint with Ivan Lendl got off to a winning start as the Scot launched his grass-court season with a win over Nicolas Mahut at Queen's.

Lendl flew in on Monday and was out practising with Murray on Tuesday morning as the world number two began preparations with his new coach for Wimbledon in a fortnight's time.

He was awaiting the winner of Britain's Aljaz Bedene and Frenchman Benoit Paire, who started later on Tuesday, in round two.

"It was tough," Murray told the BBC on court. "He's a very accomplished grass-court player and because of the weather we haven't been able to get on too much to hit. I'm glad to get through."

Murray's first spell with Lendl was the most successful in his career as he won Olympic gold, the US Open and Wimbledon, before the Czech ended the partnership, much to the Briton's dismay, in 2014 due to commitment issues.

Reunited, Lendl watched on courtside in his dark sunglasses, despite murky skies and damp conditions that left both players feeling unsure underfoot.

Playing after two days of frequent rain, Mahut took two nasty tumbles while at one stage Murray pointedly asked umpire Fergus Murphy, "so as long as the weather is fine, we keep playing no matter how slippy the court is?" He later groaned, "It's always the same."

Murray said afterwards: "It's always a bit slippy, it's frustrating for both of us sometimes. We want to play our best tennis but it's difficult to move and get in the right position."

Treacherous conditions aside, Murray showed glimpses of why he still considers grass his most favoured surface, chipping and charging into the net, and unleashing a number of brilliant passing shots Mahut could only watch sail past.

The Frenchman, fresh from winning the Ricoh Open in Holland last week, was far from outclassed, however, and had he taken one of four set points, including three in the second set, the upset would have been possible.

An early exchange of breaks forced a tie-break in the first and Mahut's best opportunity came at 8-7 on Murray's second serve, but he crashed his return into the net.

It was an excellent chance wasted and Murray capitalised, converting a third set point of his own when another Mahut forehand fell short.

The second set was no less trying for Murray, who was again broken first to trail 3-1 and 5-3, before a superb backhand pass had even Lendl applauding and initiated the comeback.

Murray saved three more set points at 6-5 thanks to some emphatic serving, before speeding away in the tie-break, a drop-shot and volley combination finishing off a captivating contest. 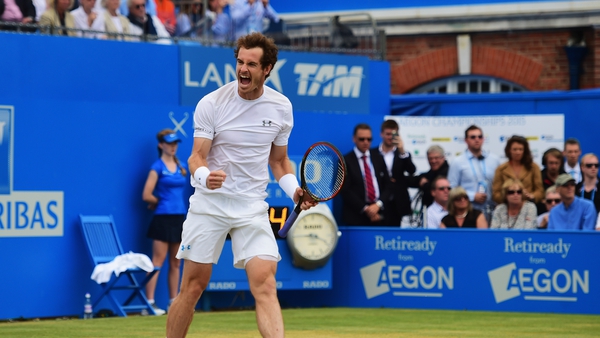