Andy Murray must pick himself up for the Davis Cup final after his ATP World Tour Finals campaign came to a premature end once again.

The Scot found no immediate solace in next weekend's showpiece event in Belgium as he contemplated a frustrating and disappointing 7-6 (7/4) 6-4 loss to Stan Wawrinka.

After beating David Ferrer and losing to Rafael Nadal, Murray faced a straight shoot-out with Wawrinka for a place in the last four, but came up short for the fourth time in six appearances at the O2 Arena.

Wawrinka now goes through to a rematch of last year's dramatic encounter with compatriot Roger Federer, which ended in acrimony after Federer's wife Mirka heckled Wawrinka with the now infamous taunt of 'cry baby'.

Murray said: "I made too many errors. It was tough. I couldn't quite get the balance. Because, when I was going for my shots, I felt like I was making errors.

"At 4-2 (in the tie-break), I gave a cheap point away. Then two second-serve returns on my backhand, one into the net, one into the tramlines at 4-3. I made one other error at the end of the set as well.

"Obviously, that was an important point in the match. But even in the last game, as well, a couple of backhands, one in the middle of the net on a deuce point, and match point, another simple backhand into the tramlines. Way too many errors. Cheap ones, as well. Disappointing."

"I made too many errors. It was tough. I couldn't quite get the balance."

Intriguingly, Murray's support team were not in their usual place by the court but up in the stands.
In his BBC column on Friday, the 28-year-old had talked about the "comfort blanket" of having family and friends to look at during a match.

He said: "When the box is extremely close to the court, I sometimes can find that a distraction. So I thought it would be better to have them sit a bit further away from the court. That was it."

The world number two spent much of the build-up to the tournament practising on clay ahead of the Davis Cup but insisted that was not an excuse.

He said: "I hit enough balls on hard (courts) the last five months. I said I felt like my timing would get better as the event went on, and it didn't actually, it got worse, which is strange. So that is nothing to do with not having enough time to prepare.

"Obviously the only positive for me this week is I've come away from it injury-free. Now I have a couple more days to get ready for Belgium."

Bizarrely, Murray returned to the court with coach Jonas Bjorkman for a late-night hit, presumably in search of his lost timing.

Saturday's first semi-final is a blockbuster between world number one Novak Djokovic and Rafael Nadal, who fought for more than two and a half hours to defeat David Ferrer in a dead rubber on Friday. 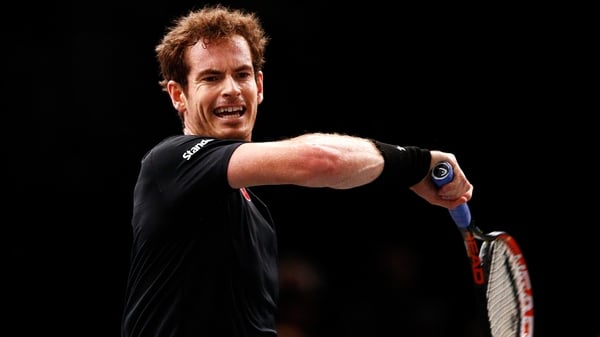