Britain reached the Davis Cup final for the first time in 37 years as Andy Murray outclassed Australia's Bernard Tomic in straight sets to give them an unbeatable 3-1 lead.

World number three Murray had teamed up with brother Jamie to win a thrilling five-set doubles rubber against Lleyton Hewitt and Sam Groth on Saturday to leave the hosts needing to win just one of Sunday's reverse singles.

The 28-year-old, who became the first Briton to win the Wimbledon men's singles in 77 years in 2013, duly delivered his third point of the match, beating an increasingly dispirited Tomic 7-5 6-3 6-2 to wild cheers from a partisan Glasgow crowd.

In doing so Murray improved his record in Davis Cup singles to 25-2 -- an incredible contribution and the main reason Britain have risen from the depths of the competition in 2010 to within one victory of their first title since 1936.

"Obviously, winning for your country and your team mates means a lot. The crowd were unbelievable from the first ball to the last," Murray told the BBC.

"I didn't feel great the whole weekend to be honest, I've been struggling with my back, but I just tried to disguise it. We've got everyone here, mother, father, wife, grandmother, mother-in-law, aunties and uncles.

"I'm delighted to get through, we knew this would be difficult, Australia have so much depth and experience but we fought extremely hard all weekend."

Murray's only moment of alarm on Sunday came in the first set when Tomic briefly raised his level, breaking back from 2-5 down to level the set at 5-5.

However, the Australian, who is ranked 23 in the world, slipped 0-40 down at 5-6 and, despite saving two set points, was bamboozled by a Murray drop shot.

After that the outcome of the match became a formality as a clearly tired Murray managed to dominate, setting up a final against either Belgium or Argentina.

That semi-final was locked at 2-2 in Brussels with the final singles rubber still to be played.

Should Belgium win they would stage the final but an Argentina victory would give Britain home advantage. 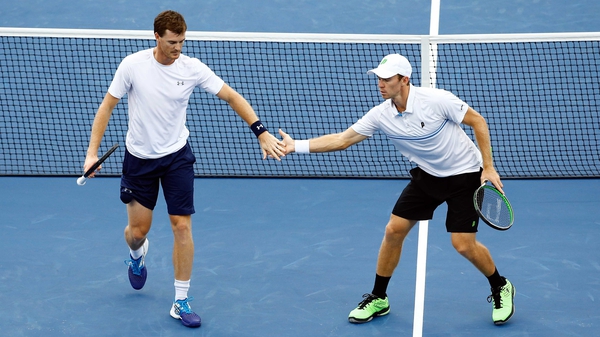