Serena Williams powered past big sister Venus to reach her 11th Wimbledon quarter-final, while best friend Caroline Wozniacki's wait for a place in the last eight at SW19 goes on.

Fifth seed Wozniacki slipped out 6-4 6-4 to the world number 20, losing in Wimbledon's fourth round for the fifth time in her career.

This was the siblings' first Wimbledon meeting in six years, some 17 years after the two five-time SW19 champions' first professional meeting. 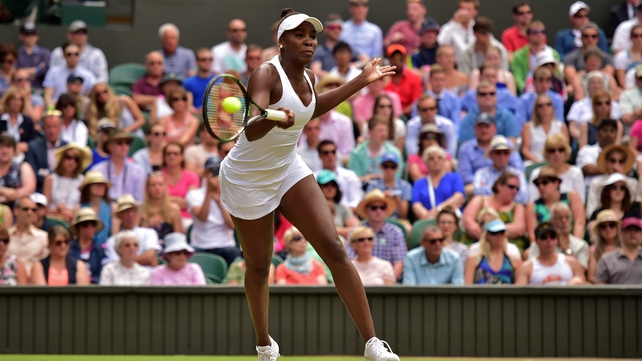 Serena will now square up to Victoria Azarenka in the quarter-finals after the 23rd seed eased past Eastbourne winner Belinda Bencic 6-2 6-3.

At 33, Serena Williams will cement her place in tennis immortality should she add two more majors to her current haul of 20 between now and the end of the year, to complete that calendar slam.

The younger Williams admitted family ties are always put aside when the inseparable sisters meet on court.
"It's hard to go up against someone you root for all the time no matter what, who you love and is your best friend in the world," said Serena. "So it's never easy, but you just play for the competition and enjoy the moment.

"I think I served well today, I didn't hit huge serves, I hit one big serve and other than that I think I was really consistent with my serve. She was playing really well, but in the end I was able to come through."

Danish star Wozniacki's conqueror Muguruza will face Timea Bacsinszky in the last eight after the 15th seed recovered from a faltering start to move past Monica Niculescu 1-6 7-5 6-2.