Eugenie Bouchard and Petra Kvitova will meet in the Wimbledon women’s singles final after both won their semi-finals in straight sets.

Kvitova powered into her second Wimbledon final just two weeks after a hamstring injury cast doubt on her involvement.

The 24-year-old Kvitova was forced to withdraw from her Eastbourne quarter-final with Britain's Heather Watson in June due to hamstring problems.

She then faced a race against time to be fit for Wimbledon, and has had her thigh heavily strapped throughout the tournament.

Any ill effects are hardly showing though, with the world number six dropping just one set - against Venus Williams in the third round - en route to the final.

Kvitova broke for a daunting 2-1 lead as the first-set action got under way, only for Safarova to recover immediately and bring the set back on serve.

The opening exchange then remained level-pegging before Safarova saved one set point in the tie-break.

Kvitova refused to waste her second opportunity though, claiming the set and visibly denting Safarova's resolve in the process.

Kvitova cemented her dominance by converting a third break point to claim a 2-0 lead at the start of the second set.

A second break for Kvitova then took the former Wimbledon champion to the brink at 5-1, with Safarova fading under the pressure.

With such a comfortable cushion, Kvitova then produced a love service game to clinch the match and that second grand slam final.

"It's great to be back in the final"

Kvitova fell at the quarter-final stage in both 2012 and 2013 following her Wimbledon title victory.

Admitting she had always targeted further success in SW19, the Czech revealed her delight at reaching her second All England Club final.

"It's tough mentally as she's a good friend of mine. I knew she would play really well, but I'm just happy to have won.

"I tried to be focused from the beginning of the second set. I won the tie-break then I broke her when she served for the second time, and I served well until the last point.

"It's great to be back in the final. I'm just emotional from this match, but I still have two days to go to the final.

"I know what it's like to be defending a title here. I really want to win my second title here and I will do everything that I can." 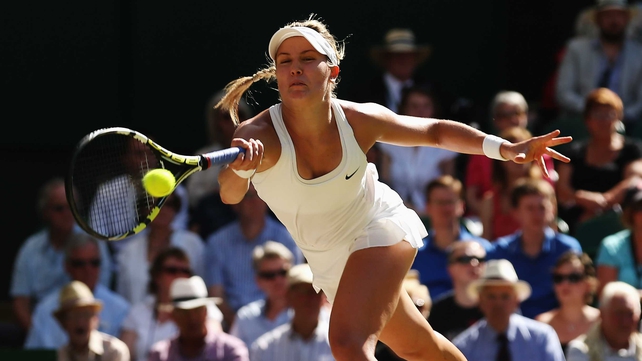 Bouchard continued her relentless march to the top of the women's game by defeating Simona Halep to reach her first grand slam final.

It was a meeting of the two most improved players on the circuit but, after Halep's run to the French Open final, this time it is Bouchard who will bid for a first slam title when she takes on Kvitova on Saturday.

Luck was certainly on 20-year-old Bouchard's side, with Halep turning her ankle early in the match and then seeing a net-cord go against her at a crucial stage of the tie-break.

The second set was all Bouchard and the Canadian, the only player to reach the semi-finals at every slam so far this season, clinched a 7-6 (7/5) 6-2 victory after an hour and 35 minutes.

Bouchard is now relishing the biggest match of her life.

"I can't wait to play. It's my first grand slam final so I'm just going to go for it," she said.

"I'll have probably my toughest match yet so I'm looking forward to the challenge.

"I never say I'm surprised because I've put in a lot of hard work and it's been years in the making.

"I believe in myself and I expect good results and I always want more.

"I've had a good start to season but I expect myself to do even better than that."

Halep, who had won her only previous meeting with Bouchard in Indian Wells in March, made the first move in blustery conditions with a break for 2-1.

But Bouchard hit straight back and, in the final point of the fourth game, Halep rolled her left ankle sliding on the grass, immediately heading to her chair to receive treatment.

The ankle was strapped up and, although it did not seem to affect her too much, movement is such a central part of her game that it was certainly a major blow.

Bouchard put the pressure on and had two break points for 5-3 but Halep held her nerve both times.

Neither player had really settled into the match and both were making more errors than would have been expected, the occasion perhaps getting the better of them.

Any nerves would only have increased when, at 3-2 to Halep in the tie-break, a woman in the crowd was taken ill, requiring a lengthy stoppage.

The Romanian won the first point on the resumption but Bouchard then retrieved the mini-break with a fortunate net-cord and seized the momentum to lead 6-4.

Halep saved one set point with a fine forehand but Bouchard made no mistake with a high swinging volley on the second.

The young Canadian had also won the first set against Maria Sharapova in the French Open semi-finals last month only for the Russian to fight back.

This time Bouchard extended her lead, with a bit of help from her opponent, who double-faulted to hand over the first break of the second set in the third game.

Bouchard's forehand was also doing plenty of damage, and Halep appeared powerless to change the momentum, another break of serve for 4-1 all but sealing her fate.

Clinching the biggest victory of her life was not straightforward for the 2012 junior Wimbledon champion, though.

Halep saved three match points on her serve and then two more went begging on Bouchard's, the second on a nervy double fault.

But a sixth chance followed and this time Bouchard's serve did the business.

"That took a little bit of mental strength there to stay focused," Bouchard said.

"I'm not going to give away my secrets but it's important for me to enjoy being out there and focus on what I need to do during the point, tactically how I want to play.

"It's tough work but it's what I love. I love working hard and I love tough moments and challenges."

Kvitova will have the experience of playing a Wimbledon final previously, when she won the 2011 title, but Bouchard is certain to be primed for the big occasion.

"She'll go in prepared and I'll be prepared as well. My coach will watch her play and give me some tips on how she plays," Bouchard told the BBC.

"I'm just going to go out there and play my game. I think I can play even better than I did today.

"I'm glad I got to stay at Wimbledon for two whole weeks. I just want to give it my best effort.

"I want to leave it all out on the court and we'll see what happens."