Maria Sharapova joined the list of big-name casualties in the Wimbledon women's singles when she was beaten 7-6(4) 4-6 6-4 in the last 16 by Germany's Angelique Kerber.

The below-par Russian fought off six match points in the final set as she tried to keep alive her hopes of a second Wimbledon title to go with her 2004 triumph, but finally succumbed in a nerve-jangling finale.

Both players had been out of action since Saturday, after bad weather meant their fourth-round clash was postponed on Monday.

It was Kerber who was quicker into her stride, leading throughout the first set.

Sharapova found her range to break back at 4-5, but some poor errors allowed the 26-year-old Kerber to win the last three points of the opening set tie-break.

The Russian hit back to level the match and seemed to be favourite to book a quarter-final place but Kerber, defending for all her worth to keep the more powerful Sharapova at bay, moved into a 5-2 lead in the decider.

Sharapova saved a match point at 2-5 and Kerber's nerve failed her at 5-3 as she served a double-fault on the way to dropping her serve.

The real drama was saved until the end though, as Sharapova saved five more match points and looked poised to complete a remarkable comeback.

Kerber would not be denied though and was celebrating when Sharapova fired a backhand long.

The German will have to recover quickly as she faces Canada's Eugenie Bouchard for a place in the semi-final on Wednesday.

French Open runner-up Simona Halep looked the model of consistency as she raced into the quarter-final with a 6-3 6-0 fourth-round win over Kazakhstan's Zarina Diyas.

The world number three, who has enjoyed a year of excellent results at consecutive grand slams, has seen seeds tumble all around her at Wimbledon.

But, apparently unperturbed, she swept aside Diyas in just 57 minutes on Court Two to set up a quarter-final date with last year's runner-up Sabine Lisicki.

Elsewhere, a clearly unwell Serena Williams and sister Venus pulled out of the Wimbledon women's doubles as their tournament ended on a worrying note.

Serena was plainly not herself on Court One and her vision looked to be the root of the trouble.

She served four consecutive double faults as the sisters surrendered the third game of their match against German Kristina Barrois and Swiss Stefanie Voegele.

At 3-0 behind the Williams sisters, who have won the Wimbledon doubles title five times, decided against taking the match any further. 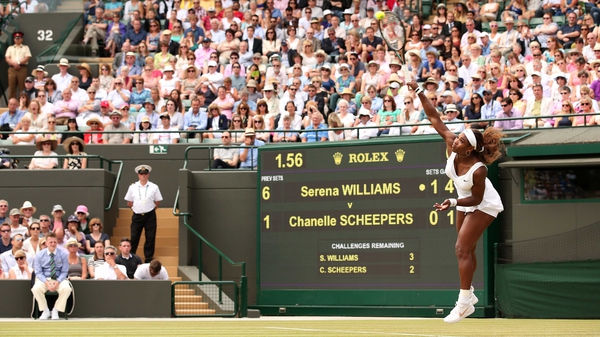 Serena Williams and Maria Sharapova stroll in third round