A third-round clash between Venus and Serena William will not happen after both were knocked out of the French Open in the second round.

Maria Sharapova in now the favourite after beating Tsvetana Pironkova in two sets.

17-times grand slam champion Serena never got into her stride against the 20-year-old world number 35.

Serena Williams had not been knocked out of a Grand Slam before the fourth round since losing in the first round of the 2012 French Open.

Muguruza's pace was too much to handle for Williams, and she will now face Schmiedlova in a third round encounter that few would have predicted.

"Of course it's amazing, I did not expect that. Today is a great day"

"Of course it's amazing, I did not expect that. Today is a great day," said Muguruza.

"I'm very happy," she then shouted at the crowd.

Williams failed to hold serve in the second set, which confirmed the impression of the opener, during which Muguruza sent the American chasing the ball in every corner.

Williams bowed out after 64 minutes having never looked in a position to unsettle Muguruza, whose best result in a grand slam was at this year's Australian Open when she reached the fourth round.

"Nothing actually worked, I just can't serve," said Williams with a smile. "It was one of those days, you can't be on (your game) every day."

Williams refused to blame her defeat on the windy conditions on yet another chilly day in Paris, a city she has a special relationship with.

She has a French coach in Patrick Mouratoglou, owns an apartment in Paris and loves to shop in the French capital, which she considers her second home.

"It's not easy. I love it here, but there's always next year. At least I won't have any points to defend next year, so I look forward to it," she said.

Until then, she will be back to training, harder than ever.

"It's great, because I'm going to go home and work five times as hard to make sure I never lose again," she said. "I want to win and I want to be the best, that's my whole goal.

"But it's great sometimes to get knocked down because you have to get back up. I love getting back up.  I love the challenge.

"I haven't gotten past the fourth round of a grand slam this year," added Williams, whose last grand slam title was at Roland Garros last year. "I have a couple of words to describe it, but I think that would be really inappropriate so I'm going to leave it at that."

Sharapova assumed the mantle of favourite and moved into the third round with victory over Pironkova.

Serena Williams' shock exit opened the door for Sharapova, who had been due to face a player she has not beaten for 10 years in the quarter-finals.

Although Sharapova is only the seventh seed, she has been the strongest player besides Williams on clay over the last three years, winning the Roland Garros title in 2012 and losing to Williams in the final last year.

She found the going tough in cold and damp conditions against Pironkova but ground out a 7-5 6-2 victory to set up an intriguing third-round clash with Sam Stosur.

Pironkova, who is much better known for her grass-court exploits, broke the Sharapova serve in the opening game and held onto her lead until 4-2.

But Sharapova began to exert more and more pressure and forced a first set point in the 10th game only to net a backhand.

Two more quickly arrived, though, and, after missing a backhand on the first, she profited from a large slice of luck when another backhand hit the top of the net and dropped over.

The second set was much more comfortable for Sharapova, who won the final four games, shrugging off a time violation in the penultimate one.

Stosur is playing with stitches in her leg after an accident in the gym but has breezed through both her matches so far.

She and Sharapova have met 15 times before, with the Russian winning 13, including on clay in Madrid three weeks ago.

In her first grand slam tournament, it was not surprising that Townsend wobbled, but she put behind her the blow of losing 4-1 and 5-1 leads in the last two sets to clinch victory.

But Wimbledon finalist Sabine Lisicki had to pull out after hurting her wrist in a fall early on against Mona Barthel and 12th seed Flavia Pennetta is also out. 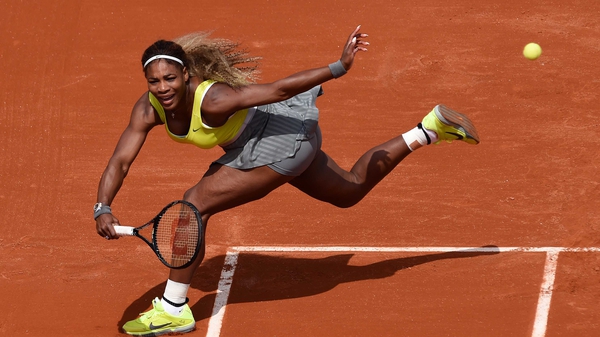