Venus Williams was sent packing from the US Open on Wednesday after her sister Serena's center court clash was among dozens of matches postponed because of rain on a gloomy third day at the last grand slam of the year.

Around four hours of play were washed out, forcing tournament officials to drastically revise the schedule so Andy Murray could finally begin his title defence.

The foul weather could not save Venus from suffering her third successive second-round defeat at the US National Tennis Center.

Once the undisputed Queen of Flushing Meadows, the 33-year-old American, the second oldest player in the women's singles draw, continues to struggle.

She did provide a reminder of her fighting qualities as she pushed the match into a deciding tiebreak but ultimately came up just short.

"I just dug myself into so many holes the whole match." she said. "I just fought as hard as I could to get out of them, but sometimes it wasn't enough."

"I was a little bit happy because at least I'm done for my job today," said Li.

Only five matches were completed in the morning before the rain arrived, sending players and spectators scampering for cover.

Players made a brief return to the courts when the drizzle stopped midway through the afternoon but another downpour saw them retreat to the locker room, forcing organisers to cancel 28 matches.

Serena was due to play Galina Voskoboeva on center court but their second round meeting was among the matches postponed in a bid to complete the men's first round. 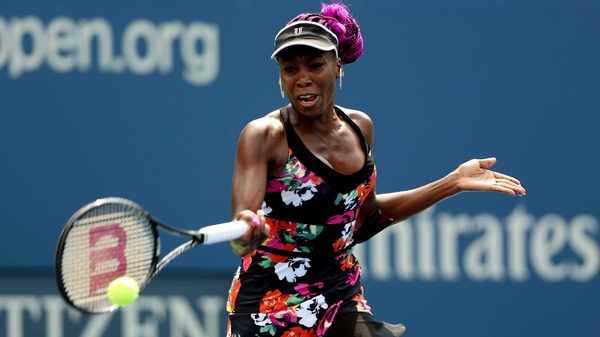