Sixth seed Angelique Kerber continued her winning streak against the Williams sisters with a dramatic victory over Venus on Arthur Ashe Stadium.

With Venus unseeded after a tough year following her revelation in New York 12 months ago that she was suffering from the auto-immune disease Sjogren's Syndrome, there was always the possibility of a big match early on.

Last year's tournament held different memories for German Kerber, who has not looked back since her surprise run to the semi-finals at Flushing Meadows, and she battled to a 6-2, 5-7, 7-5 win after two hours and 45 minutes.

Kerber has now beaten Venus three times this season while she is also the only woman to have beaten title favourite Serena since the French Open in May.

Venus has shown signs of better form recently but a tally of 60 unforced errors, including a mammoth 16 double faults, eventually proved her undoing.

The 32-year-old American showed terrific spirit in the second set, three times fighting back from a break down, including when Kerber served for the match at 5-4.

And it was Venus who made the first move in the decider to lead 4-2 before Kerber hit straight back.

She was two points from defeat at 4-5 30-30 but nailed a forehand down the line and Venus would probably rather forget the last two games.

Kerber said: "It's unbelievable. It started one year ago and I have great memories. This match was so tough and so close. Venus is such a great player and I'm very happy to beat her here.

"Everybody was against me but it doesn't matter, it was such great support. I just tried to focus on me and fight for every point until the last one. I'm very happy to be in the third round."

The Williams sisters have had a complicated relationship at times with US crowds but there was no doubt who the noisy fans were cheering last night.

Venus said: "This is the first time I've ever played here that the crowd has been behind me like that. Today I felt American for the first time at the US Open. I've waited my whole career to have this moment and here it is.

"It was awesome. It felt like winning gold. It really meant something. I'm looking forward to having that support in doubles and next year as well."

Venus looked understandably disconsolate as she left the court, adding: "Being on the losing end of a match like this isn't a lot of fun but that's sport.

"Today all I had was fight because I didn't play well. I made 60 errors so it's very difficult to win a match like that.

"I was fighting her and me. But I know one day I'm going to play her and make less errors. Unfortunately it wasn't today."

Venus still feels she has unfinished business with tennis.

She said: "If I could have made two more shots, I probably could have won that match. I think there's a big difference for me because I'm beating myself.

"If I was out there and people were killing me, maybe it's time to hang it up. But right now I have to find the answer inside myself." 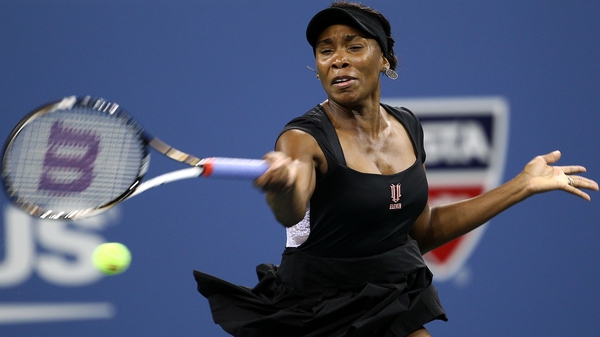 Ailing Venus withdraws from US Open