Was Novak Djokovic’s season the greatest ever in the history of the game? He won three of the four Grand Slams in 2011, yet Roger Federer and Rafael Nadal have also achieved this, indeed Federer has done it three times. Djokovic's win-loss ratio was 70/6, yet Federer achieved 81/4 in 2005 and McEnroe 84/3 in 1984.

However, I believe that Djokovic’s season was the greatest ever in the Open Era. He beat Federer and Nadal ten times throughout the year. He beat Nadal in six finals on three different surfaces. To appreciate the context of this achievement, Federer and Nadal are generally regarded to be in the top-five players in the history of the sport. Djokovic also won ten tournaments - including three Grand Slams and five Masters Series tournaments.

Another remarkable feature of Djokovic’s achievement is that this time last year he had only won one Grand Slam – the 2008 Australian Open. He, along with Andy Murray, were in The Big Four of men’s tennis, but were considered quite a level below Nadal, who was dominating the sport at the time having won three Grand Slams in a row and 16-time Grand Slam-winner Federer.

There has been a lot of discussion regarding the impact Djokovic’s diet had on his dramatic success in 2011. Since his nutritionist discovered last year that he was allergic to gluten, he has switched to a gluten-free diet and is staying away from most processed carbohydrates, which is in marked contrast to the de rigeur carbo-boost diet. Djokovic also improved his fitness levels in 2011, reaching the stage where is the best mover in the men’s game. 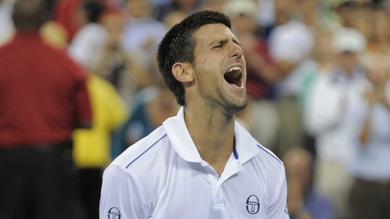 Djokovic began the year by winning the Australian Open - just his second Grand Slam. He comfortably beat Murray in straight sets in the final. Going into 2011, there was very little to separate Murray and Djokovic – there was no reason to suggest Djokovic would go on to dominate the sport the way he did. Indeed, many thought that Murray would achieve more than the Serbian in 2011. The two were the same age - 23-years-old; were born within a week of each other; and had followed a similar path throughout their professional careers.

Going into that Australian Open final, the bookies were unable to decide who was favourite for the title; Murray had been victorious the last three times they had played.

Djokovic continued his dominance of the sport by winning the ATP
World Masters in Indian Wells in March, beating Federer in the semi-finals and Nadal in the final. Two weeks later, he won in Florida - a Masters event, again coming from a set down to beat Nadal in the final.

Perhaps the greatest tournament wins of his season may not have been his three Grand Slams, but his successive victories over Nadal in the finals of Madrid and Rome. 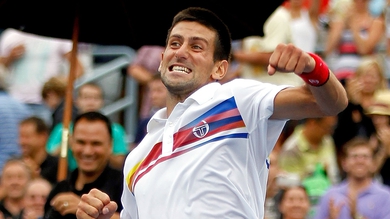 Both of these tournaments were played within a week of each other, but more importantly both were on clay. Nadal is without question the greatest player in the history of the game on clay, yet Djokovic beat him in Nadal’s homeland in straight sets, and then again a week later in Rome in straight sets.

Nadal has won six French Opens and has only lost one five-set match on clay in the 68 matches he has played in his career. He has won 32 of his 36 tournament finals on clay – two of those losses were those mentioned above by Djokovic in successive weeks.

I mentioned earlier that Djokovic lost six matches in 2011. However, I would say that the French Open semi-final defeat to Federer was the only time he lost in a match when he was fully fit. He may have ended with six defeats, but two were injury retirements, two were in the final week of the season and one was when he hit the wall against Kei Nishikori in Basle.

It would surely be fair to say that, when fully fit, he lost only one match during a gruelling 11-month season. Would it therefore also be fair to say that Djokovic was ultimately penalised for his success? Had he shut down his season after New York, history would truly have been rewritten. He had only lost twice by that point.

Djokovic went on to win Wimbledon beating Nadal in the final. 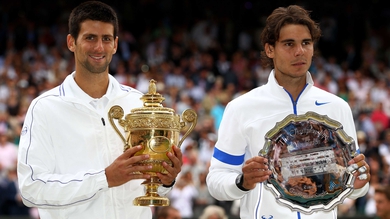 Perhaps the greatest match in the men’s game since that epic Federer against Nadal Wimbledon final in 2008 was Djokovic’s victory over Federer in the semi-final of the US Open.

Djokovic came from two sets to love down to equal the match at two sets all. However, he trailed 3-5 down, and 15-40, facing two match points on the Federer serve. His return of serve off a massive first serve by Federer is regarded to be one of the finest shots of the year, while Federer hit a net court on the second match point with the ball rolling agonisingly back on the Swiss player’s side. Djokovic rallied to win the next four games and the match. This semi-final was played late on Saturday night, yet Djokovic managed to beat Nadal the next night in the final. Djokovic won the first two sets before the losing the third set.

Djokovic had treatment on his lower back. Many felt that the momentum was swinging towards the Spaniard, yet Djokovic upped his performance to an even higher level to take the last set 6–1.

I have already mentioned Djokovic’s slight lapses in form since the end of the US Open and the reasons for it. While Federer and Nadal both have considerably better Grand Slam records, I believe Djokovic’s 2011 season was the greatest in the history of the game. The three Grand Slams, the five Masters titles - ten tournaments in total, support this fact.

However, perhaps the most telling statistic is that he beat two of the greatest players the game has ever seen on ten occasions.
We look forward to 2012 in order to follow what we hope will be another remarkable year in men’s tennis.