Roger Federer admitted feeling frightened when confronted by an intruder midway through his French Open final victory over Robin Soderling on Sunday.

Federer was preparing to receive a serve when 15-0 down in the fourth game of the second set when a spectator, wearing a top bearing the word 'Switzerland' on its front, entered the court having clambered down from high up in the stand opposite the umpire's chair.

He ran up to Federer and brandished in front of the player's face what appeared to be a flag of Spanish soccer team Barcelona.

He then attempted to place his cap on the head of Federer, who retreated way behind the service line.

Security were embarrassingly slow to react as the man danced in front of Federer for a few seconds before running around behind the chair of a line judge, charging across the court and vaulting the net.

He was then halted in his tracks as he was tackled to the ground by a security guard.

That was the only thing that threatened to derail Federer's charge to glory but he admitted it was a ‘touch scary’.

‘I don't know what happened but all of a sudden I heard the crowd, I looked over and he jumped over the fence. That gave me a fright seeing him so close right away,’ recalled Federer, who has also been confronted by intruding fans at Wimbledon and in a tournament in Montreal.

‘It's a good thing it's happened to me before. But it definitely felt uncomfortable once he came close to me.’

Federer, who won in straight sets, was able thankfully to laugh it off.

‘Normally they always look at me and go, 'I'm so sorry I have to do this', because they always have some sort of reason for it!’ he added.

‘I remember the English guy (at Wimbledon) was actually quite funny.

‘This guy here looked at me and I was not sure what he wanted. It seemed like he wanted to give me something. So I was okay, because I saw he wasn't pulling for anything stupid.’

Soderling added: ‘It wasn't great to see. I think the security were as surprised as we were.

‘It's very bad that these things can happen. It's a shame.’

The incident instantly brought back memories of the on-court attack on Monica Seles by a German spectator at a tournament in Hamburg in 1993.

The American, at that time 19 and the world number one, was stabbed in the back by a deranged Steffi Graf fan while she was sitting at a changeover during a quarter-final match against Magdalena Maleeva.

A spokesman at the police headquarters of the 16th arrondissement in Paris refused to reveal the name of the intruder.

According to the website of Swiss newspaper Le Matin, he has been arrested for 'entering the grounds of a sports event'.

The same source said he was a Spaniard who was born in 1975 and hailed from Barcelona. 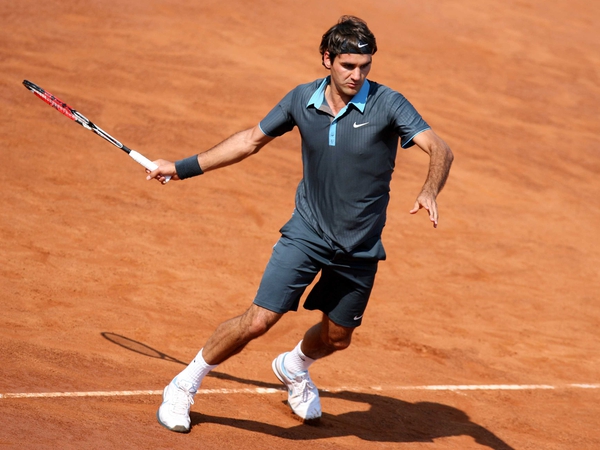