Victor Hanescu won his first career title as he took advantage of a tired Igor Andreev to claim a 6-3, 6-4 victory in 70 minutes at the Gstaad Open on Sunday.

A rainy weekend stayed dry for the title match, but it did little good for Andreev, losing 2004 finalist who was forced to conclude his semi-final in the morning a few hours before facing the well-rested Romanian.

Hanescu, 26, becomes the first from his country to win the trophy at this alpine resort venue since Ilie Nastase in 1973.

The number 80 was playing in his second career ATP singles final following a runner-up finish last September in his hometown tournament on clay at Bucharest against Frenchman Gilles Simon.

‘It's so great to win my first title here, this is something I will surely never forget,’ said Hanescu, who prior to this week had not won back-to-back matches in 2008.

With his back troubles of recent seasons behind him, the Romanian was able to let his big game flow on the high-altitude clay.

‘I'm so happy, this is like a dream come true,’ said the new champion.

Andreev lost the Gstaad final four years ago against Roger Federer. The 34th-ranked Russian will turn 25 on Monday with the loss still fresh in his mind.

‘I've been unlucky here twice, but I will be back,’ said the finalist. ‘I wasn't so tired from playing twice, but Victor was just too good.

‘He was unbeatable today.’

Hanescu - whose best performance in a Grand Slam also came on  clay when he reached the quarter-finals of the 2005 French Open - wasted no time in sprinting towards his first career honour, wrapping up the first set in 28 minutes and breaking to start the second on the way to the career breakthrough title.

Hanescu now stands 6-1 at Gstaad after his second appearance where he upset top seed Stanislas Wawrinka in the semi-finals.

That victory over the number ten was his third over a Top 10 player. Hanescu improved to 10-14 on the season after missing most of 2006 with a stomach muscle injury and leaping 566 positions into the Top 100 during 2007. 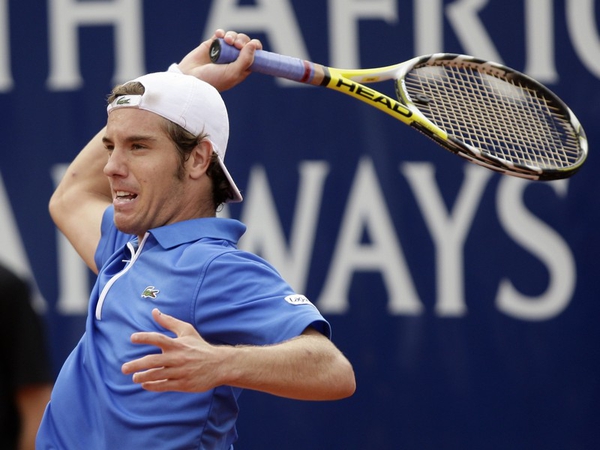