Mona McSharry has qualified for the 200m breastroke final at the European Aquatic Championships in Rome.

The Sligo native put Saturday's frustration in the 100m breaststroke behind her quickly on Sunday as she came home fourth in the second semi-final in two minutes 25.24 seconds. That time placed her fourth overall after a race with a strong pace throughout.

She will compete in the final on Monday evening.

Mona McSharry is into the 200m breaststroke final at #Rome2022 and here's how the Sligo swimmer qualified from her semi-final heat this evening #rtesport pic.twitter.com/Vpy2gmWgkX

McSharry had sealed her place in the semi-finals after finishing second in heat 3 in a time of 2:26.94, which was good enough for seventh overall.

There was disappointment for the two other Irish swimmers involved in that discipline, with Ellie McCarthy finishing ninth in the same heat as McSharry in 2:32.38, which placed her 25th overall.

Grace Hodgins finished last of the competitors in the 1500m freestyle qualifiers, clocking 17:25.04. 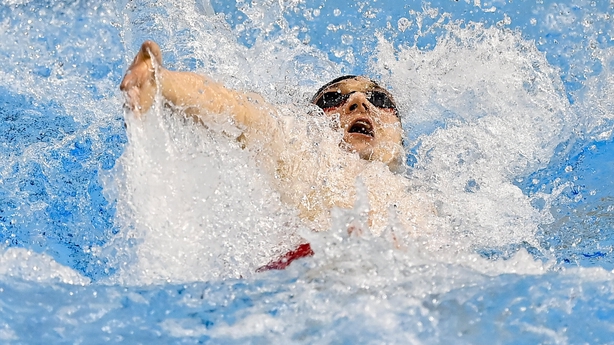 Shane Ryan missed out on a place in the 50m backstroke final.

The Pennsylvania-native finished sixth in his semi-final heat in a time of 25.19 and was ranked 13th overall.

He had progressed to the semis after winning his heat on Sunday morning, coming home in at time of 25.33 seconds in heat 1 to finish clear of Erikas Grigaitis of Lithuania.

There was disappointment for Robert Powell and Finn McGeever as both failed to progress in the heats of the 200m freestyle.

Powell went in heat 2 but came home in last place in a time of 1:54.25, just under four seconds behind the winner, Luxembourg's Pit Brandenburger, finishing 42nd overall.

McGeever went in heat 3, where he managed a time of 1:51.32, which was good enough for eighth place out of nine starters, and 36th overall. Saso Boskan of Slovenia touched the wall first in a time of 1:48.08.